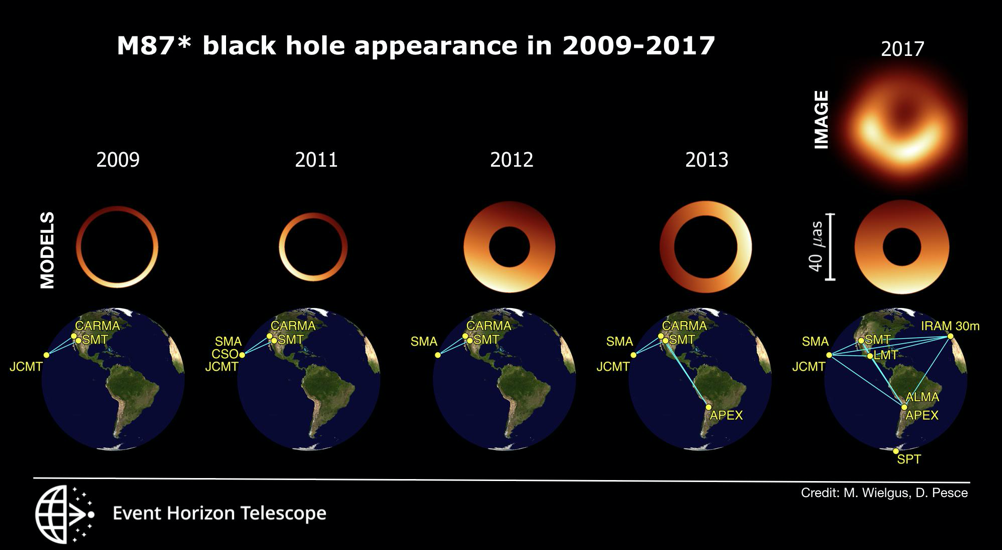 In 2019, the Event Horizon Telescope (EHT) Collaboration delivered the first image of a black hole, revealing M87*-the supermassive object in the center of the M87 galaxy. The EHT team, including researchers from JIVE, has now used the lessons learned last year to analyze the archival data sets from 2009-2013, some of them not published before. The analysis reveals the behavior of the black hole image across multiple years, indicating persistence of the crescent-like shadow feature, but also variation of its orientation-the crescent appears to be wobbling. The full results appeared today in The Astrophysical Journal.

The EHT is a global array of telescopes, performing synchronized observations using the technique of Very Long Baseline Interferometry (VLBI). Together they form a virtual Earth-sized radio dish, providing a uniquely high image resolution. "With the incredible angular resolution of the EHT we could observe a billiard game being played on the Moon and not lose track of the score!" said Maciek Wielgus, an astronomer at Center for Astrophysics | Harvard & Smithsonian, Black Hole Initiative Fellow, and lead author of the paper. In 2009-2013 M87* was observed by early-EHT prototype arrays, with telescopes located at three geographical sites in 2009-2012, and four sites in 2013. In 2017 the EHT reached maturity with telescopes located at five distinct geographical sites across the globe.

"Last year we saw an image of the shadow of a black hole, consisting of a bright crescent formed by hot plasma swirling around M87*, and a dark central part, where we expect the event horizon of the black hole to be," said Wielgus. "But those results were based only on observations performed throughout a one-week window in April 2017, which is far too short to see a lot of changes. Based on last year's results we asked the following questions: is this crescent-like morphology consistent with the archival data? Would the archival data indicate a similar size and orientation of the crescent?"

The 2009-2013 observations consist of far less data than the ones performed in 2017, making it impossible to create an image. Instead, the EHT team used statistical modeling to look at changes in the appearance of M87* over time. While no assumptions about the source morphology are made in the imaging approach, in the modeling approach the data are compared to a family of geometric templates, in this case rings of non-uniform brightness. A statistical framework is then employed to determine if the data are consistent with such models and to find the best-fitting model parameters.

Expanding the analysis to the 2009-2017 observations, scientists have shown that M87* adheres to theoretical expectations. The black hole's shadow diameter has remained consistent with the prediction of Einstein's theory of general relativity for a black hole of 6.5 billion solar masses. "In this study, we show that the general morphology, or presence of an asymmetric ring, most likely persists on timescales of several years," said Kazu Akiyama, a Jansky Fellow of the National Radio Astronomy Observatory (NRAO) at MIT Haystack Observatory, and a contributor to the project. "The consistency throughout multiple observational epochs gives us more confidence than ever about the nature of M87* and the origin of the shadow."

But while the crescent diameter remained consistent, the EHT team found that the data were hiding a surprise: the ring wobbles, and that means big news for scientists. For the first time, they can get a glimpse of the dynamical structure of the accretion flow so close to the black hole's event horizon, in extreme gravity conditions. Studying this region holds the key to understanding phenomena such as relativistic jet launching, and will allow scientists to formulate new tests of the theory of General Relativity.

The gas falling onto a black hole heats up to billions of degrees, ionizes and becomes turbulent in the presence of magnetic fields. "Because the flow of matter is turbulent, the crescent appears to wobble with time," said Wielgus. "Actually, we see quite a lot of variation there, and not all theoretical models of accretion allow for so much wobbling. What it means is that we can start ruling out some of the models based on the observed source dynamics."

"These early-EHT experiments provide us with a treasure trove of long-term observations that the current EHT, even with its remarkable imaging capability, cannot match," said Shep Doeleman, Founding Director, EHT. "When we first measured the size of M87* in 2009, we couldn't have foreseen that it would give us the first glimpse of black hole dynamics. If you want to see a black hole evolve over a decade, there is no substitute for having a decade of data."

EHT Project Scientist Geoffrey Bower added, "Monitoring M87* with an expanded EHT array will provide new images and much richer data sets to study the turbulent dynamics. We are already working on analyzing the data from 2018 observations, obtained with an additional telescope located in Greenland. In 2021 we are planning observations with two more sites, providing extraordinary imaging quality. This is a really exciting time to study black holes!"

The international collaboration of the Event Horizon Telescope announced the first-ever image of a black hole at the heart of the radio galaxy Messier 87 on April 10, 2019 by creating a virtual Earth-sized telescope. Supported by considerable international investment, the EHT links existing telescopes using novel systems - creating a new instrument with the highest angular resolving power that has yet been achieved.

The EHT consortium consists of 13 stakeholder institutes; the Academia Sinica Institute of Astronomy and Astrophysics, the University of Arizona, the University of Chicago, the East Asian Observatory, the Harvard-Smithsonian Center for Astrophysics, the Goethe- Universität Frankfurt, the Institut de Radioastronomie Millimétrique, the Large Millimeter Telescope, the Max-Planck-Institut für Radioastronomie, the MIT Haystack Observatory, the National Astronomical Observatory of Japan, the Perimeter Institute for Theoretical Physics, and the Radboud University.

Snapshots of the M87* black hole appearance, obtained through imaging / geometric modeling, and the EHT array of telescopes in 2009-2017. The diameter of all rings is similar, but the location of the bright side varies. Credit: M. Wielgus, D. Pesce & the EHT Collaboration 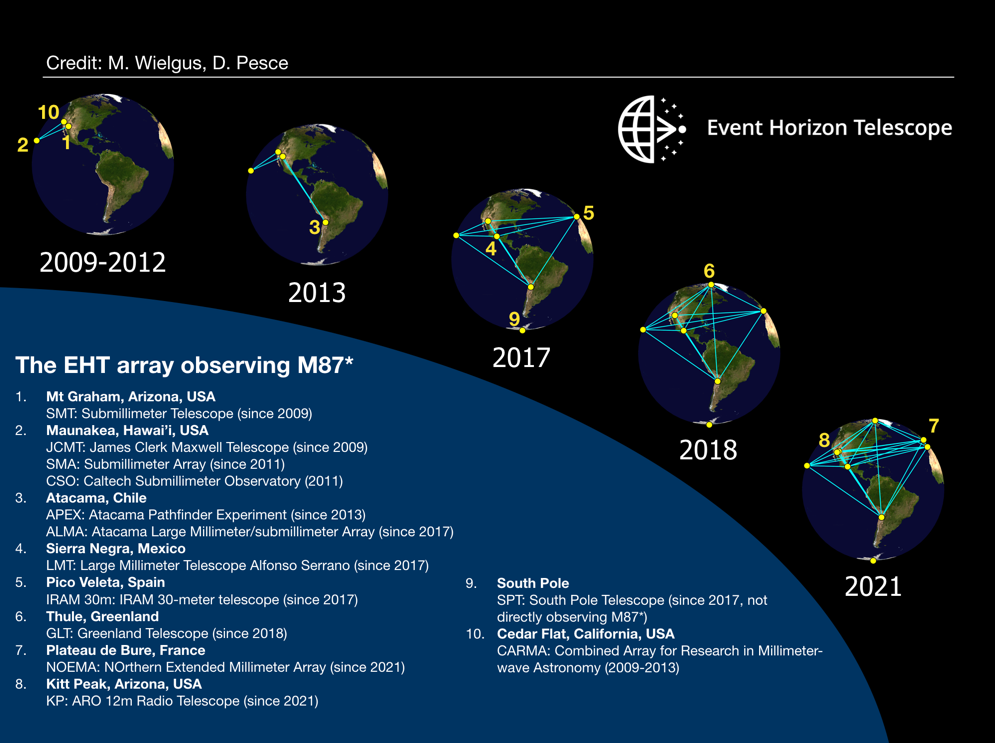