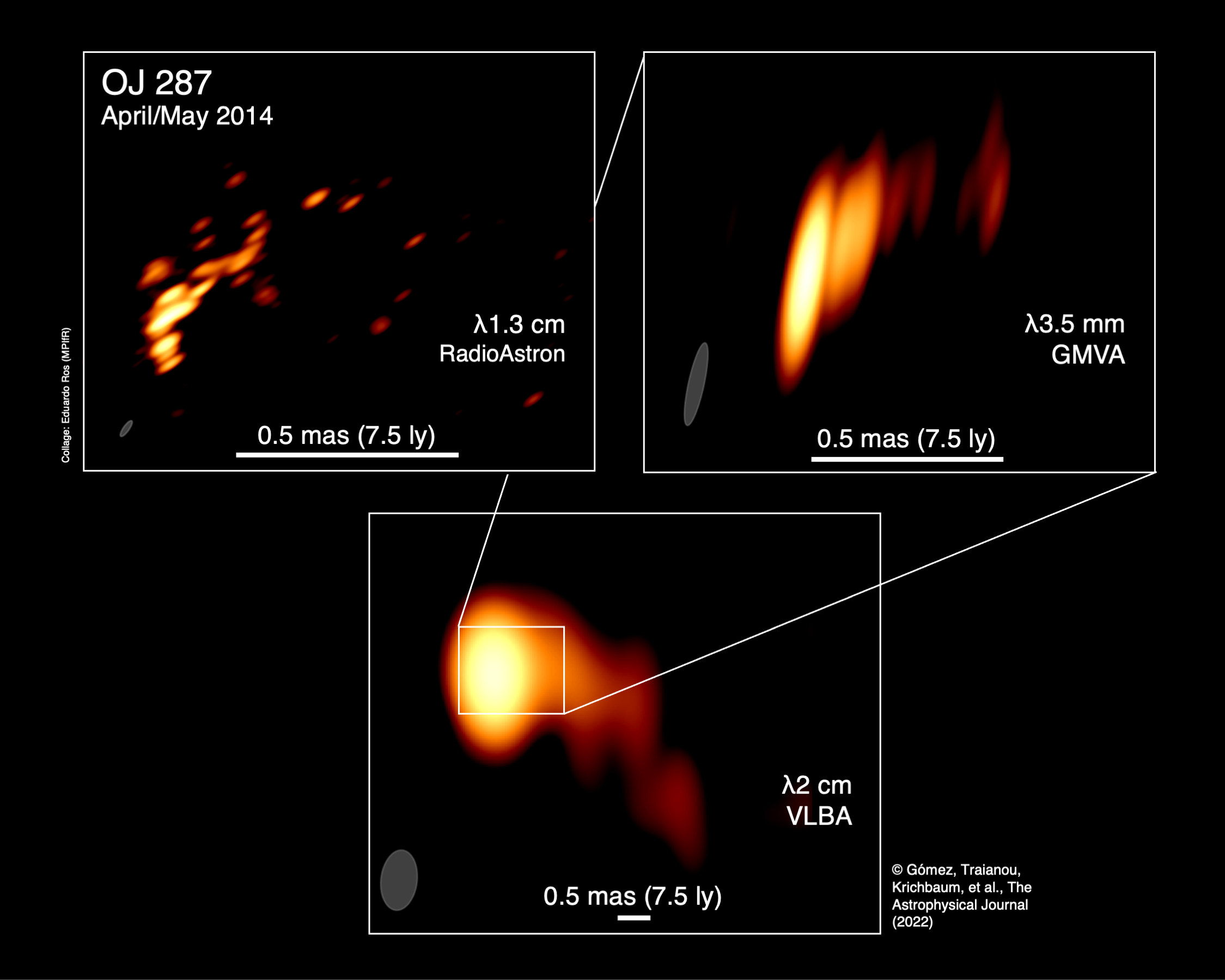 An international team of researchers - lead by the Spanish Institute of Astrophysics of Andalusia (IAA-CSIC) and including participation from a JIVE researcher -  has obtained an image of radio emission in the active galaxy OJ 287 at an angular resolution of 12 micro arcseconds, which is presently the highest resolution achieved in astronomical observations. This has been made possible with the technique of very long baseline interferometry (VLBI) which combines signals recorded at multiple radio telescopes simultaneously observing the same object and uses this combination to create a virtual telescope whose effective diameter is set by the largest distance between the participating telescopes. Combining together twelve radio telescopes distributed across the globe and an orbiting 10-metre antenna on board of the satellite Spektr-R launched and operated by the Russian Space Agency, the researchers have effectively constructed a radio telescope with a diameter of 193,000 km and used it to peer into the very heart of the galaxy OJ 287 believed to host a pair of supermassive black holes. Their findings are published in the current issue of “The Astrophysical Journal”.

The galaxy OJ 287 is not an ordinary object. It belongs in a special category of galaxies called blazars. The main characteristic of a blazar is that in its centre is situated a supermassive black hole that accretes matter, gas, and dust. Moreover, a pair of axisymmetric relativistic plasma jets are launched from their central region and points towards Earth. The exact mechanism forming these jets is still unknown. OJ 287 is remarkable for one more reason. At its centre is situated not one but two supermassive black holes, with the secondary orbiting the primary, piercing its accretion disk twice every 12 years. This system is the only close binary supermassive black hole system candidate we know so far in our cosmic neighbourhood.

A group of astronomers worldwide managed to construct the highest resolution image of OJ 287 obtained to date by employing VLBI observations at 4 different radio wavelengths in total intensity and polarisation with ground-based antennas - including global millimetre VLBI array (GMVA) observations, archival 15 GHz VLBA data, and publicly available 43 GHz data from the VLBA-BU-BLAZAR monitoring programme - as well as space VLBI (22GHz observations from the RadioAstron mission). The  participation of the 10-metre orbiting antenna Spektr-R (RadioAstron space mission, lead by the Astro Space Center (ASC) in Moscow, Russia, and supported by the Russian Space Agency), helped them to create a radio telescope with a diameter 15 times the Earth’s, achieving resolution of ~12 microarcseconds. In other words, the resulting image is so detailed as to see from Earth a 20 cent coin on the Moon’s surface. “We have never observed the inner workings of the jet in the supermassive binary black hole candidate OJ287 with such fine detail”, says Thalia Traianou, researcher  at IAA-CSIC.

"I joined the RadioAstron project almost at the very beginning of its development, in 1979. It is very rewarding to see that it delivers what it has been conceived for - breathtakingly sharp images of AGN, one of the most powerful engines of the Universe," says Leonid Gurtvits, JIVE Head of Space Science and Innovative Applications and Professor of the Aerospace Faculty at Delft University of Technology. "And this result is achieved by the team which has many young researchers who were not even born when RadioAstron was on the drawing boards."

Further analysis of the data revealed that this spectacular source exhibits a highly curved plasma jet with several knots, or brighter regions, whose nature is unknown. Comparison of space and ground-based observations revealed a progressive curvature of the jet with increasing angular resolution, in agreement with theoretical predictions that OJ 287 harbours not one but two supermassive black holes, with the secondary orbiting the primary and piercing its accretion disk twice every twelve years.

In addition, the team found that while the energy in the innermost regions of the jet arises from plasma particles, at larger distances it comes from both the particles and the local magnetic field. They also found evidence that the magnetic field in the innermost regions is coiled, in a helical structure that is consistent with jet formation models.

“These results helped us to move a step forward on broadening our knowledge on the morphology of relativistic jets close to the central engine, confirming the role of magnetic fields in jet launching and record one more time indirect signs of the existence of a proximate super massive black holes binary system deep in the heart of OJ 287”, concludes Thalia Traianou (IAA-CSIC).

The RadioAstron space VLBI mission led by the Russian Astro Space Center and the Lavochkin Scientific and Production Association, was an international collaborative mission centred around the Spektr-R satellite, which was launched in July 2011, carrying a 10-m space radio telescope (SRT) into an elliptical Earth orbit. The aim of the mission is to use the space telescope for radio astronomical observations using Very Long Baseline Interferometry (VLBI) techniques in conjunction with ground-based VLBI networks located in Australia, China, Germany, India, Italy, Japan, Korea, Poland, Russia, Spain, South Africa, Sweden, Ukraine, and the USA. The mission operated between 2011 and 2019.

The Joint Institute for VLBI ERIC (JIVE) has as its primary mission to operate and develop the European VLBI Network (EVN) data processor, a powerful supercomputer that combines the signals from radio telescopes located across the planet. Founded in 1993, JIVE is since 2015 a European Research Infrastructure Consortium (ERIC) with seven member countries: France, Italy, Latvia, the Netherlands, United Kingdom, Spain and Sweden; additional support is received from partner institutes in China, Germany and South Africa. JIVE is hosted by the Netherlands Institute for Radio Astronomy (ASTRON) in the Netherlands.

The curved jet in the active galaxy OJ 287 from radio images taken at the sharpest resolution with RadioAstron (a global array including the space radio telescope Spektr-R in orbit around Earth; top, left), the Global mm-VLBI Array (operating at the short wavelength of 3.5 mm; top, right) and the Very Long Baseline Array (an array of ten antennas across the USA, from the Virgin Islands in the East to Hawaii in the West; bottom).  The ellipses at the bottom left indicate the image resolution in each case, a scale bar in milliarcseconds (mas) is also provided.  The top panel shows a record-breaking resolution of about 12 microarcseconds, achieved when the space radio telescope is 15 Earth diameters away from the ground telescopes (a distance of about 190,000 km, comparable to the Moon orbit). Credit: Eduardo Ros (MPIfR), images: Gómez et al. (The Astrophysical Journal, 2022).