The H2020 JUMPING JIVE project, which successfully passed its final review by the European Commission, has been instrumental during the past 4 years in the development and reinforcement of JIVE and the European VLBI Network (EVN) activities in key aspects for their sustainability that will impact the VLBI community in the next decades.

The Joining up Users for Maximizing the Profile, the Innovation and Necessary Globalization of JIVE (JUMPING JIVE) project aimed to strengthen JIVE, enhance the European VLBI Network (EVN),  advocate its services and enlarge its partnerships, and prepare JIVE and the EVN for future scientific and technological challenges in preparation for global VLBI in the era of multi-messenger astrophysics. The 4-year project funded by the European Commission comprised the participation of 12 institutes from 8 European countries.

Towards a Sustainable JIVE

JUMPING JIVE worked towards strengthening the sustainability of JIVE with actions to establish new partnerships including, most notably, efforts to support new countries to become JIV-ERIC members, which resulted in the formal adoption of Latvia (2017) and Italy (2021) as JIV-ERIC members; the assistance to VLBI groups and facilities in several countries around the world to start collaborations that eventually could initiate the process to become JIV-ERIC members - e.g. the signature of Memorandum of Agreement between JIVE and NARIT (Thailand); or actions to support national radio astronomical communities, e.g. efforts linking the Portuguese interests (and membership) in SKA and those of the EVN expansion in Azores and Africa.

"The effort that resulted in the success of JUMPING JIVE started already at the time of the formation of the collaboration that became an H2020 project. All partner institutions demonstrated the importance of working in synergy to reach common goals," says JUMPING JIVE Project Manager Giuseppe Cimò. "The activities of the project, such as supporting the development of radio astronomical communities in Africa or the work in the definition of the SKA-VLBI science cases, have highlighted to potential new partners the role of JIVE and the EVN as centers of technological and scientific excellence."

The project provided a forum to explore potential synergies between JIVE and the International LOFAR Telescope (ILT), which finally resulted in the support of JUMPING JIVE to ILT in their first steps in 2021 to become a European Research Infrastructure Consortium (ERIC). Both entities are open to the possibility of collaborating in the future, e.g. in the overall astronomy research infrastructure landscape.

Over the course of the project, JIVE has been established as an open and welcoming community with a strong emphasis on its ability to provide high-quality support for anyone interested in doing science with the EVN. In this sense, JUMPING JIVE fostered an active presence at international astronomy meetings, reaching thousands of astronomers by bringing the scientific potential of VLBI to a broad community.

A key achievement of the JUMPING JIVE project was the improvement of VLBI user capabilities. On one hand, this was done through the integration of new telescopes that enhanced the EVN roster. On the other hand, the project worked on new technical implementations for the EVN such as incorporating geodetic capabilities, which ensure relevance for new audiences and therefore will eventually increase the number of EVN users.

JUMPING JIVE also focused on modernising tools used by the VLBI community, including setting up a centralised monitoring system for the EVN at JIVE and building pySCHED, a modernised version in Python of the legacy programme SCHED that is used for the scheduling of VLBI networks around the world. Both new tools have seen a good uptake within the VLBI community in general and the EVN users specifically.

One of the most important achievements of the project was the development of the VLBI20-30: a scientific roadmap for the next decade – The future of the European VLBI Network White Paper, describing the science case for VLBI and providing suggestions towards upgrade paths for the EVN. The White paper - involving 80 astronomers and engineers from different countries around the world in its preparation - has become a scientific roadmap for the VLBI community as well as becoming one of the reference scientific white papers of the present decade.

Another key focus of JUMPING JIVE was building capacity for VLBI in Africa. For this, the project enhanced the awareness of the opportunities in physics and astronomy to broaden the knowledge of astronomy and related projects within African institutes and local communities, including the training of over 250 early-career researchers in seven African countries in collaboration with the UK and South African Development of Radio Astronomy in Africa (DARA) programme, and support for short-term placements in EU institutions for several African students. 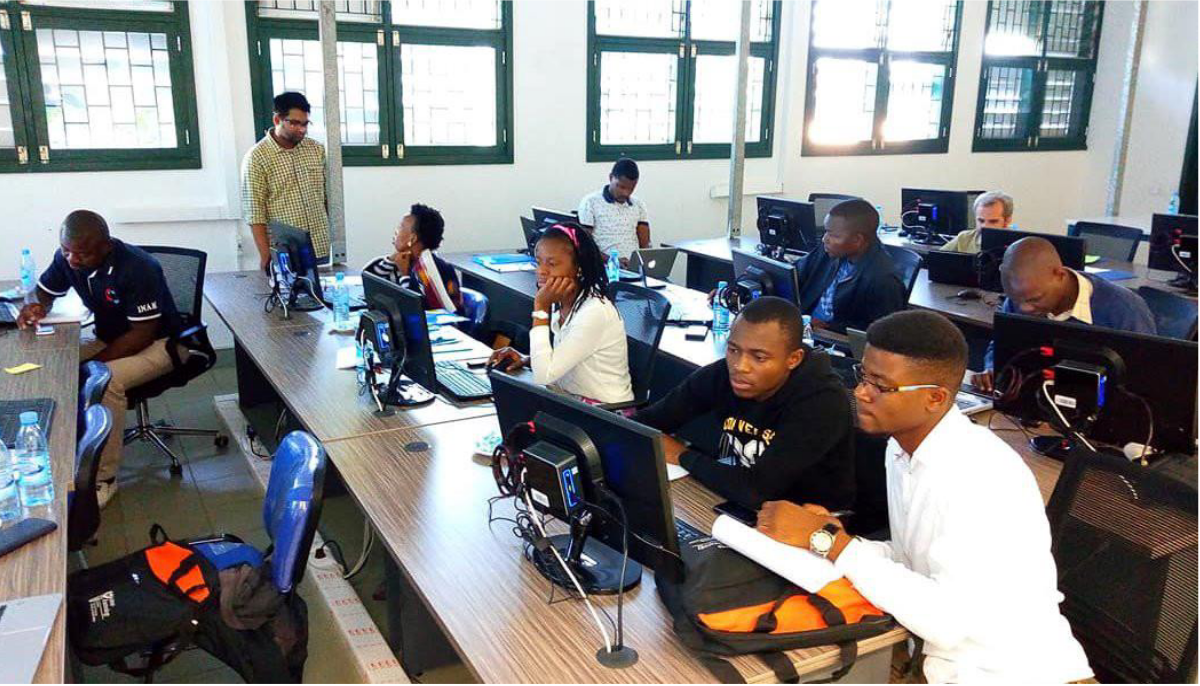 The participating early-career researchers benefited in a variety of ways with the majority transferring the training, skills and knowledge obtained to local colleagues and institutes in Africa, including success stories such Dr. Asabere (Ghana) who after attending JUMPING JIVE training lead the development, commissioning and operations of the converted 32-m in Ghana that, with the assistance of JUMPING JIVE, became the first African radio telescope, outside of South Africa, to link with and gain fringes with the EVN.

Finally, JUMPING JIVE pursued the globalization of VLBI in the era of the Square Kilometre Array (SKA). The project was instrumental in developing a possible operational model for SKA-VLBI and based on that, initial steps have been taken to form a Global VLBI Alliance as well as a SKA VLBI Consortium. JUMPING JIVE also supported the VLBI science working group for the elaboration of the portfolio of SKA-VLBI science cases.

JUMPING JIVE has been instrumental in the development of JIVE and the strengthening of the EVN, ensuring its future relevance and sustainability and reasserting the role of JIVE as a key global player in the field of VLBI, with the EVN at the core of its activities. Many actions of the project are considered core activities of JIVE and the EVN nowadays, ensuring its continuation beyond the lifetime of the project.

"The support in the EC Horizon2020 program to research infrastructures provided the opportunity to explore areas that are essential contributions to the sustainability of JIVE", says Francisco Colomer, JIVE Direct and JUMPING JIVE Coordinator. "The activities in the JUMPING JIVE project have provided the main scientific and technological ingredients for a bright future, and have had a huge impact in the visibility of VLBI among astronomers, other facilities, and society in general".

The JUMPING JIVE project received funding from the European Union’s Horizon 2020 research and innovation programme under grant agreement No 730884.

The Joint Institute for VLBI ERIC (JIVE) has as its primary mission to operate and develop the European VLBI Network (EVN) data processor, a powerful supercomputer that combines the signals from radio telescopes located across the planet. Founded in 1993, JIVE is since 2015 a European Research Infrastructure Consortium (ERIC) with seven member countries: France, Italy, Latvia, the Netherlands, United Kingdom, Spain and Sweden; additional support is received from partner institutes in China, Germany and South Africa. JIVE is hosted by the NWO-I Netherlands Institute for Radio Astronomy (ASTRON) in the Netherlands.

Image A: Attendees of the ITAC-TNRT meeting in Thailand in November 2019. Credit: TNRT.