Transient sources show a sudden increase in brightness and total energy release, often outshining their whole environment. There are various types, which are active on different time scales. JIVE researchers study a range of these phenomena with the EVN and other instruments. 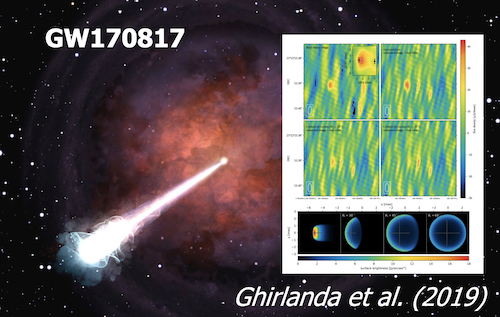 Transient sources are related to some of the most powerful processes in the Universe. Often these are explosive phenomena (like supernovae, long gamma-ray bursts). Peculiar stars like white dwarfs, or compact objects like neutron stars and stellar black holes may produce transient outbursts as well, especially when these are in binary systems. White dwarfs in binaries produce runaway thermonuclear flare observed as a nova eruption; white dwarfs are also the progenitors to the much more powerful Type Ia supernova explosions. When gas exchange occurs between the companions in a binary system with a compact object, often an accretion disc is formed. Accretion is strongly connected to jet formation under certain conditions, this is why we see well-collimated relativistic ejecta from black hole X-ray binaries (aka microquasars) with black holes or neutron stars. VLBI is the best tool to study relativistic jets and other explosive phenomena, thanks to the excellent spatial resolution the EVN and other VLBI arrays provide.

Most recently, JIVE staff was also heavily involved in studying binary neutron star mergers, that are sources of gravitational wave radiation detected by the LIGO-Virgo-KAGRA) interferometer.

Fast Radio Bursts (FRBs) are millisecond-duration transient sources of intense, coherent radiation originating in distant galaxies that are signposts of extreme astronomical environments. Telescopes all over the world are used to conduct searches for FRBs, localise them, and study their host galaxy and local environment. The EVN in particular is a prime instrument to study the radio environment of FRB sources in their host galaxies at milli-arcsecond scales. Such VLBI observations are required to characterise the nature of radio emission (which could be caused by star formation or a compact radio source) and to constrain the size of any radio nebulae. The LOFAR telescope is also a great tool to look for and study repeating FRBs because observations at low radio frequencies are especially sensitive to the "propagation effects" imparted by magnetised and ionised gas between us and an FRB source, allowing us to gain a unique insight into the local environment of the burst. VLBI and low frequency observations are thus critical in shedding light on the sources of these enigmatic bursts. 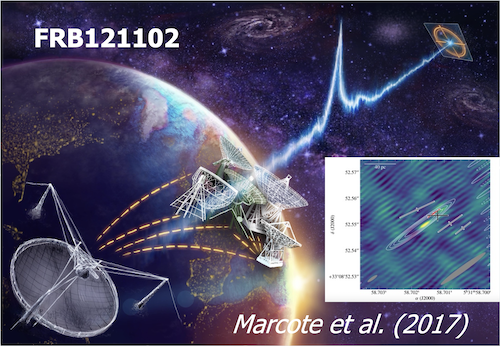 The fact that FRBs are produced at cosmological distances was revealed thanks to the great resolving power of radio interferometers. Especially the EVN, with its ultimate resolution, is an excellent tool to unveil the places where they originate from. By imaging these bursts we do not only reveal the host galaxies, but also the local neighbourhood within these galaxies, where FRBs were produced. Tracing the environments where several of these bursts occur provides the key clues to understand the conditions that are required to produce this phenomenon and hence what kind of astronomical objects are associated with these fast and energetic mysterious events.

JIVE staff contributed to various aspects of this research, but they also invested a lot of effort in developments making crucial discoveries possible. Thanks to the various aspects of electronic-VLBI (e-VLBI) developments led by JIVE that allow direct streaming of the data from thousands of km to the central data processor and processed in real time, the EVN has become a powerful instrument to study transients. The correlator software (SFXC) developed at JIVE is being continuously upgraded to tackle phenomena like FRBs, that require very high time (microseconds) and spectral resolution, and specialised data processing methods (e.g., coherent de-dispersion).

Global VLBI detection of the radio afterglow of the gravitational wave event GW170817, which were triggered by the merging of two neutron stars. Comparison with simulations shows evidence for the emergence of a relativistic jet from this cataclysmic event. Credit: Ghirlanda et al. 2019. Artwork: Beabudai Design.