VLBI has a broad range of synergies with space science and exploration. Together with EVN  partners and other world-wide collaborations, JIVE has been involved in a number of pioneering  projects in two space-related areas of research, space-borne VLBI (SVLBI) and Earth-based  VLBI observations of spacecraft (near-field VLBI). 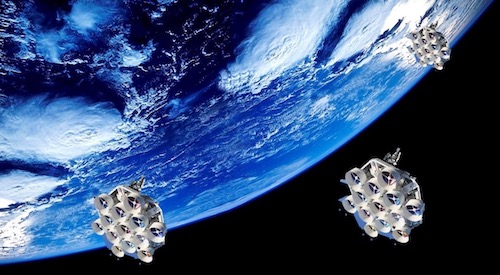 Earth-based VLBI, at all permitted by the Earth atmosphere and ionosphere wavelengths, operates at the maximal baselines comparable to our planet’s diameter. This principally limits  the angular resolution of VLBI observations. Moreover, the ability to probe high brightness of  celestial radio sources depends on the physical size of the telescope’s aperture (the baseline in the  case of an interferometer). As demonstrated by Earth-based VLBI studies, many astrophysical  phenomena and celestial radio sources require higher angular resolution and/or ability to tackle physical phenomena of ultra-high brightness. This necessitates baselines longer than the Earth’s diameter by creating VLBI systems with space-borne radio telescopes.

The first generation of SVLBI systems included the Japanese-led VSOP/HALCA (1997–2003)  and Russian-led RadioAstron (2011–2019) missions. JIVE has been actively involved in both  these endeavors. These missions enabled high-resolution studies of active galactic nuclei,  sources of maser emissions, neutron stars and interstellar medium. At present, JIVE continues  processing SVLBI data obtained with the EVN and the RadioAstron mission. The institute has also  initiated a study of the next generation SVLBI concept - THEZA (TeraHertz Exploration and  Zooming-in-for Astrophysics). Its aim is a mission that will enable, among other science tasks,  transformational studies of the immediate vicinity of supermassive black holes anywhere in the  Universe with linear resolution sharper than the characteristic size of these objects. These  studies will pave the way for addressing cornerstone problems of cosmology and fundamental  physics.

Spacecraft as a target of radio astronomy observations

Spacecraft are equipped with radio transmitters. Thus, they can be treated as radio astronomy  targets, in particular – VLBI targets, enabling astrometric observations similar to those of natural  celestial radio sources. However, spacecraft, even the most distant planetary science missions,  are much closer to Earth than the closest galactic natural VLBI targets. The wavefront of  spacecraft radio emission cannot be treated as planar. VLBI observations of such close targets  require a special technique called near-field VLBI. This technique has been advanced at JIVE  and demonstrated in 2005 for the ESA’s Huygens mission. That experiment involved 17 radio  telescopes around the globe and provided positioning of the Huygens Probe during its  parachute descent in the atmosphere of Titan with the lateral precision of about 1 km. Moreover,  the technique also enables estimates of radial velocity of spacecraft by means of Doppler  measurements with the precision of the order of 10 μm/s. Together, near-field VLBI and Doppler  measurements provide valuable input into precise determination of spacecraft state vector – an  important ingredient of many space-science missions.

Based on the Huygens VLBI experiment, JIVE together with the Department of Astrodynamics  and Space Missions of the Delft University of Technology and other partners developed a  concept of Planetary Radio interferometry and Doppler Experiment (PRIDE) adopted as one of  nominal experiments of the ESA’s large class mission JUICE (JUpiter ICy moons Explorer) due  to launch in April 2023. The prime goal of JUICE is to explore the habitable zone around Jupiter and its icy moons. The main measurables of PRIDE-JUICE, the lateral coordinates and radial  velocity of spacecraft, will serve as input into improvement of the Jovian system ephemerides  and provide support to multi-disciplinary science investigations of the Jovian system. JIVE is the  PI organisation of the PRIDE-JUICE experiment.