Through maser action, molecular radio emission can reach brightness levels that can be studied with VLBI. This provides a unique probe of the cold interstellar medium, particularly where non-equilibrium conditions excite the molecules in order that they radiate through the maser amplification process. Masers can thus be found at the birth sites of (massive) young stars or in the circumstellar shells of evolved stars. With VLBI one can then carry out high resolution studies of the kinematics, astrometry and even magnetic field determinations through polarimetry. Below you can find some research areas of Galactic VLBI maser science which JIVE staff are involved in. 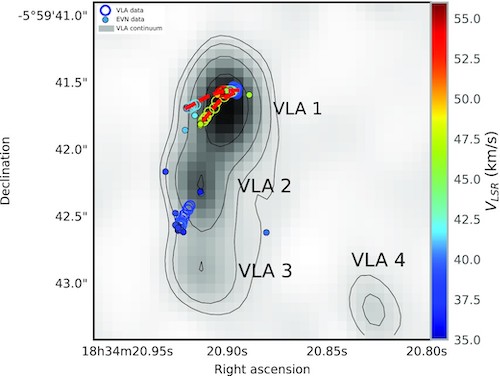 The evolutionary processes of stars like our Sun are generally well understood, however several interesting questions remain related to how they form or what they do at the end of their lives. Key information needed to understand these processes include the masses, luminosities, and energy in these stellar laboratories–fundamental physical properties. Unfortunately, we can only observe with our telescopes the intensity and angular dimensions, motions of the emitted radiation, all of which are very sensitive to the physical distance to its source.

Trigonometric parallax is a direct way of measuring these physical distances to our observed stellar systems. It relies on the same principle as surveyors use at constructions: measuring the angular position of “nearby” objects (i.e. sources in the Milky Way) against distant background reference points that are so far that they appear fixed in place (i.e. active galactic nuclei, AGN, in galaxies billions of light years away). By measuring these angular shifts at the two ends of a baseline (a known distance, in our case the orbit of the Earth around the Sun), we can see the nearby Galactic radio sources move relative to the faraway AGN as we look at them over a year. From this, the distances to our stellar systems can be calculated.

In VLBI radio astronomy, we use masers as a way of measuring the distances and motion of young and old stars, as masers are ideally suited for high-precision angular measurements and trace well our sources of interest. Using the same angular measurements, we can also see how the masers move relative to each other, gaining some physical information about the gas they live in. Measuring the distance to a lot of these masers around a lot of different stars, we can also study the Galactic structure and kinematics of the Milky Way. 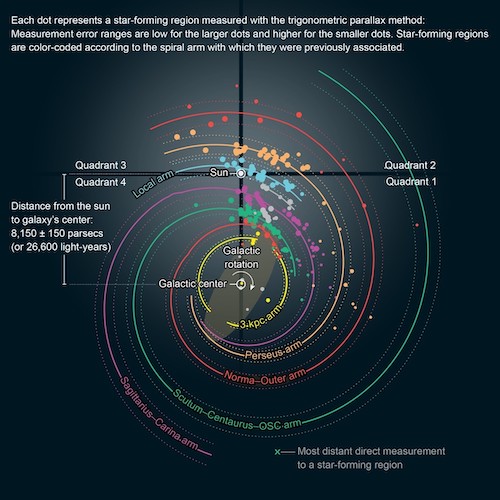 The Milky Way in which our Sun orbits, is a spiral galaxy with a bar in its central region. The rotation and spiral structure can be sampled by doing astrometric monitoring of masers associated with sites of high mass star formation. As radio emission propagates undisturbed through the dusty interstellar medium, this allows us to measure the Milky Way with great precision. Clues about how the Milky Way built up over cosmological times are probably locked up in the populations of old stars which were born in bursts associated with past merger events. Therefore, old stars in the inner Galaxy with circumstellar masers are a target for VLBI astrometric studies. The Galactic centre region, which harbours a supermassive black hole, is of special interest.

Masers (colorful dots and circles, where colors represent their velocities) can be found for example in the gaseous regions of stellar birth sites (contours and greyscale pixels). Masers are very compact and bright, like laser points on the sky, that trace underlying structures and motions in the gas. Using such VLBI measurements, we can measure the distance and velocity of these young stars and their environments. Credit: Burns et al, 2020, MNRAS, 491, 4069.

When measuring the distance and motion of many star formation sites using maser VLBI, we can build up a picture of the underlying structure of our home, the Milky Way Galaxy. Using many thousands of hours of data of large VLBI projects going on for more than a decade, we can see that the Milky Way is made up of four major spiral arms around a central, barred bulge of stars–with our Sun around 8000 parsecs from the centre. Young stellar birth sites probe this spiral structure very well, while other objects can reveal other parts of the Galactic structure. Credit: Reid and Zheng, Scientific American, 2020.