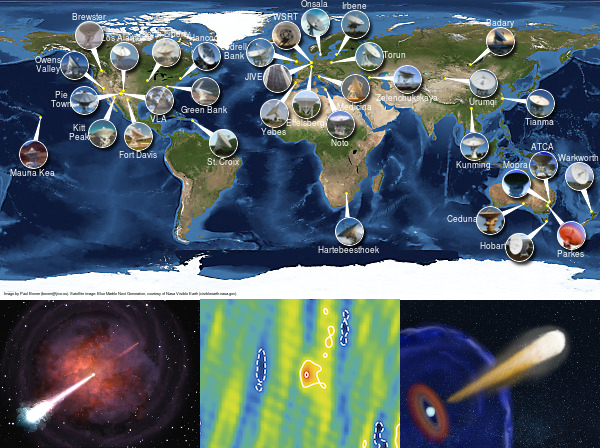 Astronomers have combined radio telescopes from five continents to prove the existence of a narrow stream of material (jet) emerging from the only gravitational wave event involving two neutron stars observed so far.

In August 2017, two neutron stars were observed colliding, producing gravitational waves that were detected by the American LIGO and European Virgo detectors. Neutron stars are ultra-dense stars, roughly the same mass as the Sun, but similar in size to a city like Amsterdam. This event is the first and only one of this type that has been observed so far, and it happened in a galaxy 130 million lightyears away from Earth. Astronomers observed the event and the subsequent evolution across the entire electromagnetic spectrum, from gamma-rays, X-rays to visible light and radio waves. Two hundred days after the merger, observations combining radio telescopes in Europe, Africa, Asia, Oceania, and North America proved the existence of a jet emerging from this violent collision. These findings have been published in the scientific journal Science by an international team of astronomers, led by Giancarlo Ghirlanda from the National Institute for Astrophysics (INAF, Italy).

This neutron star merger represented the first case where it was possible to associate a detection of gravitational waves to an object emitting light. The event has confirmed scientific theories that have been under discussion for tens of years, and the association of neutron star mergers with one of the most powerful explosions in the Universe: gamma-ray bursts. After the merger, a huge amount of material was expelled into space, forming a shell around the object. Astronomers have been tracing its evolution at different wavelengths. However, there were still some remaining questions concerning this event that could not be clarified by any previous observations. "We expected part of the material to be ejected through a collimated jet, but it was unclear whether this material could successfully pierce through the surrounding shell." explains Ghirlanda. “There were two competing scenarios: In one case, the jet can not break through the shell, instead generating an expanding bubble around the object. In the other, the jet is successful in penetrating the shell and then propagates further into space”, expands Tiziana Venturi (INAF). Only the acquisition of very sensitive radio images with very high resolution would discard one scenario or the other. This required the use of a technique known as Very Long Baseline Interferometry (VLBI) that allows astronomers to combine radio telescopes all around the Earth.
The authors of this publication conducted global observations in the direction of the merger on 12 March 2018 using 33 radio telescopes from the European VLBI Network (that connects telescopes from Spain, the United Kingdom, The Netherlands, Germany, Italy, Sweden, Poland, Latvia, SouthAfrica, Russia, and China), e-MERLIN in the UK, the Australian Long Baseline Array in Australia and New Zealand, and the Very Long Baseline Array in the USA. The data from all telescopes were sent to the Joint Institute for VLBI ERIC (JIVE, in the Netherlands), where the most advanced processing techniques were used to produce an image with a resolution comparable to resolving a person on the surface of the Moon. In the same analogy, the expanding bubble would appear with an apparent size equivalent to a truck on the Moon, whereas a successful jet would be detected as a much more compact object. "Comparing the theoretical images with the real ones, we find that only a jet could appear sufficiently compact to be compatible with the observed size.", explains Om Sharan Salafia (INAF). The team determined that this jet contained as much energy as produced by all the stars in our Galaxy during one year. “And all that energy was contained in a size smaller than one light year.” says Zsolt Paragi (JIVE).
In the coming years, many more of these neutron star binary mergers will be discovered. “The obtained results also suggest that more than 10% of all these mergers should exhibit a successful jet.”, explains Benito Marcote (JIVE). "These types of observations will allow us to unveil the processes that take place during and after some of the most powerful events in the Universe.", concludes Sándor Frey (Konkoly Observatory, Hungary).
This study appeared on the 22 February 2019 volume of Science (http://science.sciencemag.org/content/early/2019/02/20/science.aau8815) and was led by Giancarlo Ghirlanda from the National Institute for Astrophysics (INAF, Italy).

Upper panel: Representation of all radio telescopes that participated in this observation. Credit: Paul
Boven (JIVE).
Lower panel, left: Artist’s impression of the merger of two neutron stars with all the material expelled into space and the observed jet after breaking through this shell. Credit: Beabudai Design.
Lower panel, middle:  Image of the source obtained from the combination of 33 radio telescopes from five continents. The source can be seen in the center of the image as a red spot (false color image made entirely for illustration). Credit: Giancarlo Ghirlanda/Science.
Lower panel, right: Artist’s impression of the jet of material launched after the merger of the two neutron stars. Credit: Katharina Immer (JIVE).