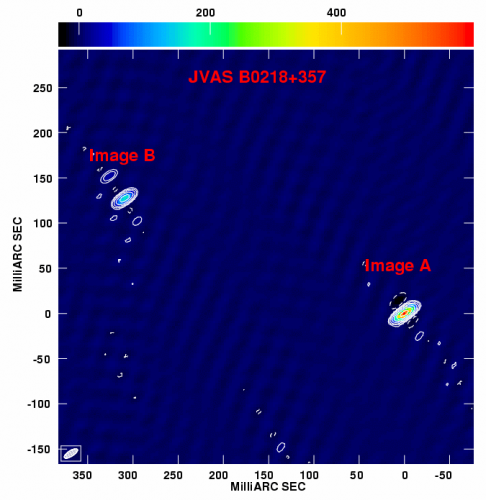 The first ever real-time European "eVLBI" image was produced at JIVE in Dwingeloo on 28 April. Signals from three radio telescopes of the European VLBI Network (EVN) were sent directly via fibre networks into the Data Processor at JIVE and correlated, without the data at any time having been stored on disk. This is called "eVLBI": a technique to link the telescopes together through an electronic network. eVLBI has the potential to realise much higher data rates, and make data analysis in real time a possibility. In other words: live images from the edge of the Universe can be obtained.

What is JIVE (Joint Institute for VLBI in Europe)

JIVE is the central institute of the European VLBI Network (EVN), a large European, distributed scientific facility in which national radio telescopes in several countries (including the Westerbork telescope in the Netherlands) work together. VLBI means "Very Long Baseline Interferometry", a technique that links radio telescopes to create a virtual radio telescope with a diameter of many thousands of kilometres. This giant telescope is used to create very detailed images of the radio emission from stars in our own galaxy and in the centres of other galaxies. VLBI allows radio astronomers to distinguish objects separated by about 1 millarcsecond - that’s the equivalent of seeing individual astronauts on the moon from Earth. JIVE is hosted by ASTRON in Dwingeloo.

What is the advantage of "real-time" eVLBI?
The most important advantage of "real-time" eVLBI is that during an observation, fringes from the source observed can be viewed directly on the computer screen. In this way it is possible to check in real-time, whether the telescopes and correlator are operating correctly. During the observation, the fringes of the astronomical source did disappear at one point. As the observation was carried out in real-time however, the fault could be recognised and corrected with a simple phone call to the telescopes, demonstrating the improved efficiency and reliability of the system. When an observation is not carried out in "real-time", faults are only discovered long after the observing session is finished.
Previous "eVLBI" EVN images have been created from data transported via fibre networks, but for these earlier observations, the data were stored on disks before being correlated.

Future
The data rates used for this experiment were still quite low (32 Mb/s). "But we are aiming for 512 Mb/s on six telescopes by the end of this year", says Dr Garrett, Director of JIVE. "By further developing the eVLBI technique, we can begin to detect the first radio luminous objects in the early Universe."

Experiment
The successful experiment took place between 14.10 and 16.00 Dutch time, the array comprising radio telescopes located in Onsala (Sweden), Jodrell Bank (UK) and a single antenna of the Westerbork Synthesis Radio Telescope (the Netherlands).
The source observed is a gravitational lens system, JVAS B0218+357. A lens system arises when the light from a distant object is deflected by an intervening massive galaxy. This causes the distant object to be distorted and can result in it being split into multiple images.  The bending of the light is similar to what happens on a hot day when an image of the sky can be seen on a road surface. In the case of B0218+357, we see two images of a bright radio quasar, separated by 334mas across the sky.

Networks used
To transfer the data from radio telescopes in the UK, Sweden and the Netherlands, the astronomers used National Research and Education Networks (NRENs) and GÉANT. The NRENs used were: SURFnet, SUNET, NORDUnet and UKERNA.
GÉANT is the Pan-European Network that connects the NRENs together, to form one of the world’s most advanced international research networks.

Results and technical details
A single, dual polarised 4-MHz band, at a frequency of 5.0 GHz was observed with 2-bit sampling, resulting in a total data rate of 32 Mb/s. The output of the correlator is an interference fringe for each pair of radio telescopes. A plot of the fringe amplitudes is shown in fig 2. The observed beating is characteristic of a double source, the rate of the beating depending on the distance between the two telescopes (the baseline) and the separation of the two sources. Mathematical transformation and further processing are required to produce the final image shown in fig 1. Here both images of the quasar can be clearly distinguished. Separation and orientation agree excellently with previous observations.