Cosmic flashes pinpointed to a surprising location in space

Astronomers have been surprised by the closest source of mysterious flashes in the sky called fast radio bursts. Precision measurements with radio telescopes reveal that the bursts are made among old stars, and in a way that no one was expecting. The source of the flashes, in nearby spiral galaxy M 81, is the closest of its kind to Earth. The research including the participation of JIVE researchers has been published today in two papers in Nature and Nature Astronomy.

Fast radio bursts are unpredictable, extremely short flashes of light from space. Astronomers have struggled to understand them ever since they were first discovered in 2007. So far, they have only ever been seen by radio telescopes.

Each flash lasts only thousandths of a second. Yet each one sends out as much energy as the Sun gives out in a day. Several hundred flashes go off every day, and they have been seen all over the sky. Most lie at huge distances from Earth, in galaxies billions of light years away.

In two papers published in parallel this week in the journals Nature and Nature Astronomy, an international team of astronomers - including the participation of JIVE researchers - present observations that take scientists a step closer to solving the mystery – while also raising new puzzles. The team is led jointly by Franz Kirsten (Chalmers, Sweden, and ASTRON, Netherlands) and Kenzie Nimmo (ASTRON and University of Amsterdam, Netherlands).

The scientists set out to make high-precision measurements of a repeating burst source discovered in January 2020 in the constellation of Ursa Major, the Great Bear.

“We wanted to look for clues to the bursts’ origins. Using many radio telescopes together, we knew we could pinpoint the source’s location on the sky with extreme precision. That gives the opportunity to see what the local neighbourhood of a fast radio burst looks like”, says Franz Kirsten.

To study the source at the highest possible resolution and sensitivity, the scientists combined measurements from telescopes in the European VLBI Network (EVN). By combining data from 12 dish antennas spread across half the globe, Sweden, Latvia, The Netherlands, Russia, Germany, Poland, Italy and China, they were able to find out exactly where on the sky they were coming from.

“The great sensitivity and global distribution of these telescopes make the EVN a unique instrument for fast radio burst studies. Years of research and development at the Joint Institute for VLBI ERIC (JIVE) in detecting and localising fast transients finally pays off, with exciting and ever surprising new discoveries”, says JIVE Head User Support and Chair of the EVN Programme Committee, Zsolt Paragi.

The EVN measurements were complemented with data from several other telescopes, among them the Karl G. Jansky Very Large Array (VLA) in New Mexico, USA.

When they analysed their measurements, the astronomers discovered that the repeated radio flashes were coming from somewhere no one had expected.

They traced the bursts to the outskirts of the nearby spiral galaxy Messier 81 (M 81), about 12 million light years away. That makes this the closest ever detection of a source of fast radio bursts.

In this respect, JIVE researchers were fundamental to perform the analysis to localise the fast radio burst. "The combination of all these telescopes observing together allowed us to determine the location of the bursts with a precision equivalent to distinguish a person walking on the surface of the Moon", says JIVE Support Astronomer Benito Marcote, second author of the paper published in Nature. The high precision provided by VLBI allows us to determine exactly which small region of the galaxy the bursts are coming from - something other techniques are not capable of.

There was another surprise in store. The location matched exactly with a dense cluster of very old stars, known as a globular cluster.

“It’s amazing to find fast radio bursts from a globular cluster. This is a place in space where you only find old stars. Further out in the universe, fast radio bursts have been found in places where stars are much younger. This had to be something else,” says Kenzie Nimmo.

Many fast radio bursts have been found surrounded by young, massive stars, much bigger than the Sun. In those locations, star explosions are common and leave behind highly magnetised remnants. 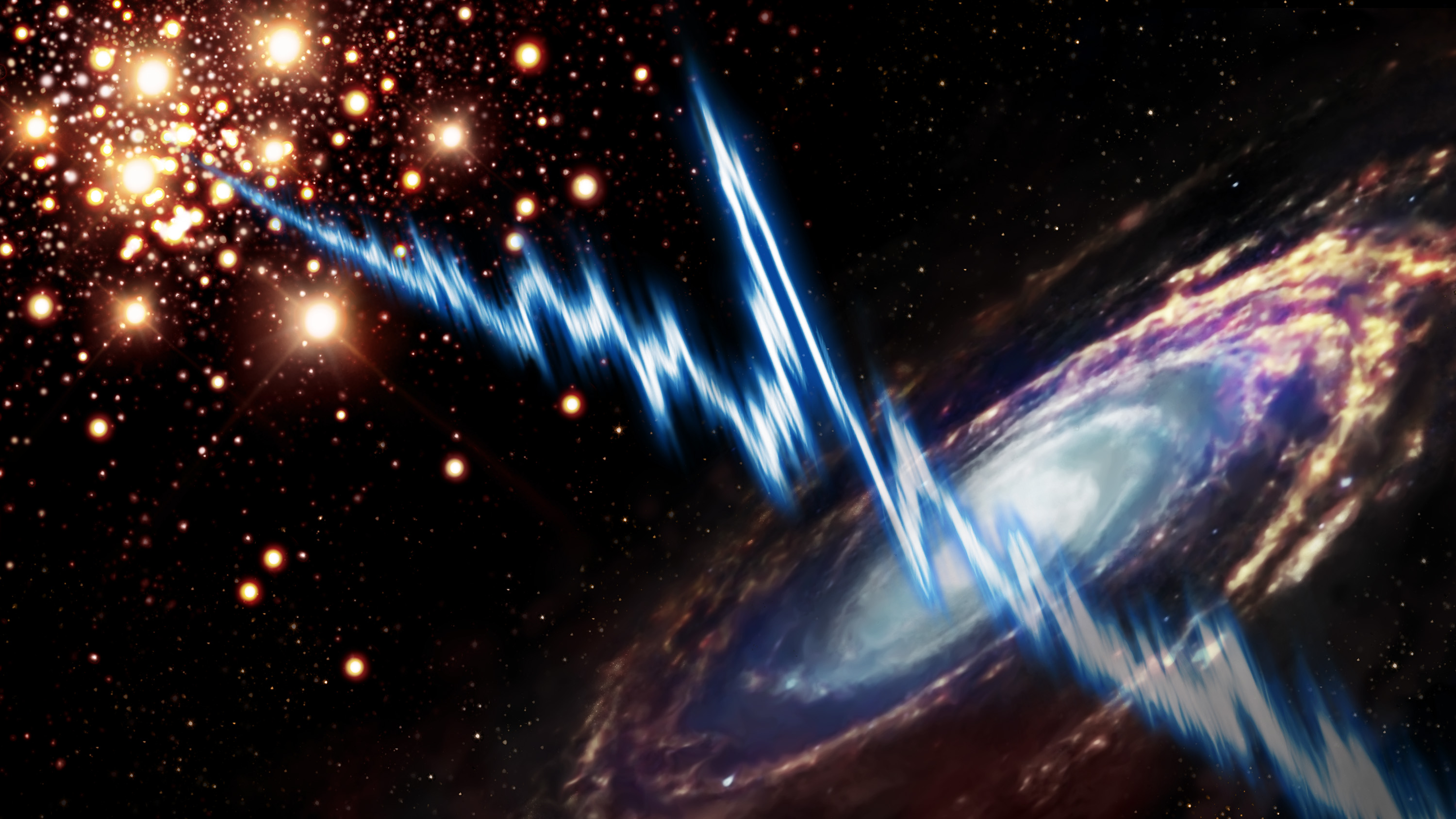 Scientists have come to believe that fast radio bursts can be created in objects known as magnetars. Magnetars are the extremely dense remnants of stars that have exploded. And they are the universe’s most powerful known magnets.

“We expect magnetars to be shiny and new, and definitely not surrounded by old stars. So if what we’re looking at here really is a magnetar, then it can’t have been formed from a young star exploding. There has to be another way”, says team member Jason Hessels, University of Amsterdam and ASTRON.

The scientists believe that the source of the radio flashes is something that has been predicted, but never seen before: a magnetar that formed when a white dwarf became massive enough to collapse under its own weight.

“Strange things happen in the multi-billion-year life of a tight cluster of stars. Here we think we’re seeing a star with an unusual story”, explains Franz Kirsten.

Given time, ordinary stars like the Sun grow old and transform into small, dense, bright objects called white dwarfs. Many stars in the cluster live together in binary systems. Of the tens of thousands of stars in the cluster, a few get close enough for one star to collect material from the other.

That can lead to a scenario known as “accretion-induced collapse”, Kirsten explains. “If one of the white dwarfs can catch enough extra mass from its companion, it can turn into an even denser star, known as a neutron star. That’s a rare occurrence, but in a cluster of ancient stars, it’s the simplest way of making fast radio bursts”, says team member Mohit Bhardwaj, McGill University, Canada.

Looking for further clues by zooming into their data, the astronomers found another surprise. Some of the flashes were even shorter than they had expected.

“The flashes flickered in brightness within as little as a few tens of nanoseconds. That tells us that they must be coming from a tiny volume in space, smaller than a soccer pitch and perhaps only tens of metres across”, says Kenzie Nimmo.

Similarly lightning-fast signals have been seen from one of the sky’s most famous objects, the Crab pulsar. It is a tiny, dense, remnant of a supernova explosion that was seen from Earth in 1054 CE in the constellation of Taurus, the Bull. Both magnetars and pulsars are different kinds of neutron stars: super-dense objects with the mass of the Sun in a volume the size of a city, and with strong magnetic fields.

“Some of the signals we measured are short and extremely powerful, in just the same way as some signals from the Crab pulsar. That suggests that we are indeed seeing a magnetar, but in a place that magnetars haven’t been found before”, says Kenzie Nimmo.

Future observations of this system and others will help to tell whether the source really is an unusual magnetar, or something else, like an unusual pulsar or a black hole and a dense star in a close orbit.

“These fast radio bursts seem to be giving us new and unexpected insight into how stars live and die. If that’s true, they could, like supernovae, have things to tell us about stars and their lives across the whole universe", says Franz Kirsten.

The research was based on observations with the European VLBI Network, the Karl G. Jansky Very Large Array, with additional data from the Hubble, Chandra and Fermi space telescopes, and the Subaru Telescope located in Hawaii.

Main Image - Source of mysterious radio signals: an artist’s impression of a magnetar in a cluster of ancient stars (in red) close to the spiral galaxy Messier 81 (M81). Credit: Daniëlle Futselaar/ASTRON, artsource.nl.

Secondary image - Extremely fast radio signals from a surprising source. A cluster of ancient stars (left) close to the spiral galaxy Messier 81 (M81) is the source of extraordinarily bright and short radio signals. The image shows in blue-white a graph of how one flash’s brightness changed over the course of only tens of microseconds. Credit: Daniëlle Futselaar/ASTRON, artsource.nl.