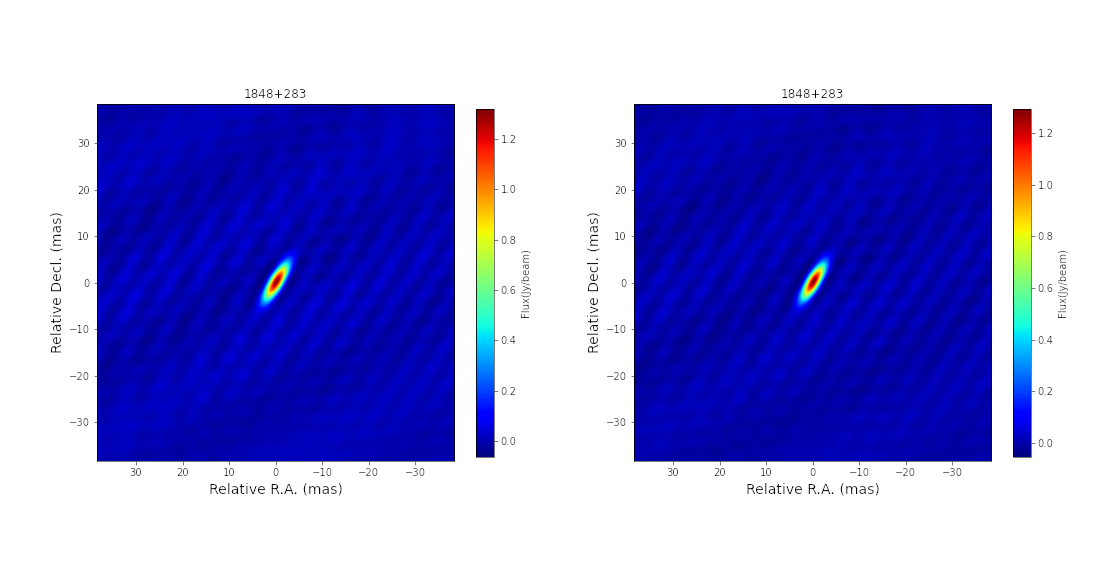 The CASA package is now capable of calibrating the majority of VLBI observations. The new tasks and functionalities to process and calibrate VLBI observations - whose implementation has been led by JIVE - are described in a paper published in the Publications of the Astronomical Society of the Pacific (PASP) journal. In addition to a description of the software, a comparison with AIPS processing is included, demonstrating the results are virtually identical. This paper appears jointly with the new CASA reference paper, which gives a high-level overview of the entire CASA package.

The Common Astronomy Software Applications (CASA) software package is a data processing software used for different radio telescopes. It is the main processing package for instruments such as the Atacama Large Millimetre/submillimetre Array (ALMA), and the Karl G. Jansky Very Large Array (VLA). The CASA software can process data from both single-dish and aperture-synthesis telescopes.

“VLBI has long been perceived as black-belt radio astronomy, in part because it uses software and complex calibration processes which are unique to this community. Having CASA capable of processing VLBI observations, and even doing this in Jupyter notebooks, is a major step forward in making VLBI accessible to a larger community of astronomers,” says JIVE Project Scientist Ilse van Bemmel.

Starting as part of the BlackHoleCam ERC project, JIVE has led the implementation of the functionality required for VLBI data processing in the CASA package, with the first releases appearing as part of the later CASA5 series. Since then, VLBI data processing in CASA has matured and is now capable of handling the vast majority of VLBI observations. This has significantly lowered the threshold for calibrating and analysing VLBI observations by non-experts.

A close collaboration with NRAO ensured that the underlying CASA software infrastructure can handle the specific calibrations. Two new tasks have been implemented: fringefit and accor. The fringefit task is based on the Astronomical Image Processing Software (AIPS) FRING task; it has recently been expanded to handle dispersive delay corrections. Many existing CASA tasks have been upgraded to properly handle VLBI observations and their meta-data. The new CASA-VLBI functionality has been extensively tested and verified in the development of a CASA-based pipeline for the Event Horizon Telescope.

Subsequent funding from the H2020 ESCAPE project has allowed JIVE  to develop a Jupyter-CASA kernel and associated notebooks for calibration of European VLBI Network (EVN) continuum data. The notebooks exploit the new CASA VLBI functionality, as well as newly developed interfaces with the Virtual Observatory, and they observe the FAIR principles for astronomical data collection. It has enormous benefits for educational purposes and attracting new users for VLBI facilities such as the EVN and Very Long Baseline Array (VLBA).

Since the VLBI community has been relying on the AIPS software for decades, the CASA-VLBI paper demonstrates how CASA and AIPS compare in the calibration quality. Though the computational speed of CASA is still slower, the quality of the calibration is comparable, and sometimes even better.  The flexibility and parallelisation of the CASA package have clear benefits in optimising the performance. In the longer term, the CASA development (including the VLBI functionality) will move towards scalable architectures that will enable the package to evolve with the ever growing data rates of (VLBI) telescopes and significantly improve its performance.

Please use the CASA reference paper and this article as citations for the CASA software package or VLBI-specific CASA implementations within articles that use these resources.

The H2020 ESCAPE project - which includes JIVE as one of its partners - aims to find solutions for common problems identified between astronomical, astrophysical and particle physics research domains with the intent to define requirements of the European Open Science Cloud. Common problems have been identified in the areas of handling (extremely) large datasets, finding the scientifically verified / curated software for extracting science from those datasets and knowledge of requirements to run it, enabling discovery of datasets and a science analysis platform that allows joint analysis of datasets from different (ESCAPE) partner instruments or observations.

BlackHoleCam is the platform for coordinating the European efforts of the Event Horizon Telescope. It operated as an ERC project from 2014 to 2019, funded by the European Commission (ERC synergy grant No. 610058). It combined the capabilities of 32 universities and research institutions all across Europe and South Africa.

The images of one source from EVN experiment N14C3 processed with AIPS (left) and CASA (right) demonstrate how identical the results are. Credit: Ilse van Bemmel.

The DOI’s listed here will be accessible once the papers appear on the PASP website. Until then, please use the ArXiv links instead.

This paper describes new tasks and functionalities implemented in CASA for the processing of Very Long Baseline Interferometry (VLBI) data. This work was led by the Joint Institute for VLBI European Research Infrastructure Consortium (JIVE) in collaboration with the CASA team.
ArXiv: https://arxiv.org/abs/2210.02275
DOI: 10.1088/1538-3873/ac81ed

This CASA paper presents a high-level overview of the basic structure of the CASA software, as well as procedures for calibrating and imaging astronomical radio data in CASA. This paper is the new CASA reference paper, aimed at the general CASA user community.
ArXiv: https://arxiv.org/abs/2210.02276
DOI: 10.1088/1538-3873/ac9642