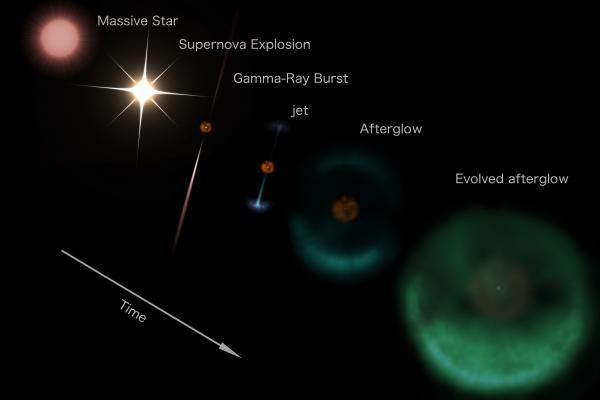 When the biggest stars in the Universe reach the end of their lives, they collapse due to their own gravity and produce explosions known as supernovae. In some cases, they also emit a gamma-ray burst, which contains a huge amount of energy: a flash of a few seconds can hold as much energy as the Sun would produce during its entire life. This makes these events detectable across very long distances.

Astronomers believe that these gamma-rays are produced by a very fast jet of material expelled by the star during its collapse. The gamma-rays are preferentially emitted forward, and can therefore be detected only if the jet points directly towards the Earth. After the gamma-rays, on the other hand, the jet decelerates and expands in the interstellar gas, producing a longer-lasting, fainter afterglow which may be visible also when the jet points away from the Earth. If the afterglow is detected, but the gamma-ray burst is not, the afterglow is said to be ‘orphan’.

This object was particularly interesting as its environment (that is, the galaxy where it took place) also resembled the environment where the only fast radio burst studied in detail so far is located. Fast radio bursts are extragalactic bursts of radio emission that last for just a few milliseconds and it is still unclear where they originate from. “The team thought that FIRST J1419+3940 could be another place where these fast radio bursts can be produced, maybe unveiling a connection between gamma-ray bursts and fast radio bursts”, explained Kenzie Nimmo from the University of Amsterdam.

After discovering the object in 2018 a team of astronomers led by Benito Marcote (JIVE) conducted a fast response observation (known as a Target of Opportunity) to look at the emission in real time. They used the astronomy technique Very Long Baseline Interferometry to combine radio astronomy antennas from the European VLBI Network, across Europe, Asia, and South Africa.  The team studied the object in detail at a high resolution – equating to being able to read a newspaper from a distance of 40 km.
At this level of detail the team were able to measure the size of the object. They noted that it corresponded to a cloud with a size of five light years across, which was ejected after the original explosion and that has been traveling all this time (around 30 years) at an average of 10% the speed of light. Such speeds could only have been produced by an extreme explosion, like those seen during gamma-ray bursts.

“If the jet were pointing towards the Earth, this would have been seen as an extremely bright and powerful gamma-ray burst.” explained Om Salafia, from the National Institute for Astrophysics (INAF), Italy. “No such burst has been observed at the time of the explosion, but this is not unexpected: the probability that the jet was pointing towards the Earth is very low. For these reasons, we believe that this afterglow is actually orphan”.

e-MERLIN is a National Facility operated by the University of Manchester at Jodrell Bank Observatory on behalf of STFC.

The Joint Institute for VLBI ERIC is an international institute based in the Netherlands that provides support, conducts leading research and forwards technical development in the field of radio astronomy. Its primary mission is to operate and develop a powerful supercomputer, known as the correlator, which processes data from the European VLBI Network (EVN) – an array of radio telescopes located across the globe.

Artist's impression of the time evolution of the observed event: from the original massive star, and the explosion during its death that produced a hidden gamma-ray burst, to the afterglow that was finally observed. Credit: Benito Marcote (JIVE).