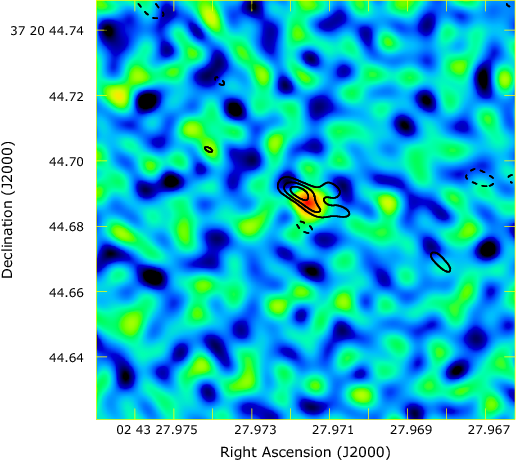 DWINGELOO, the Netherlands (27 January 2010) - An international team of scientists, including several astronomers from the Joint Institute for VLBI in Europe (JIVE) and the Netherlands Institute for Radio Astronomy (ASTRON), both located in Dwingeloo, have observed a supernova with peculiar radio emission. In a paper to be published in the 28 January 2010 issue of Nature, the team led by JIVE's Zsolt Paragi reports, for the first time ever, detection of a relativistic outflow in a Type Ic supernova, thus supporting the link with the even more energetic Gamma Ray Bursts, some of the most energetic explosions in the Universe.

At the end of its life, the central region of a massive star collapses while its outer layer is expelled in a gigantic explosion. This phenomenon is known as a supernova. Supernova SN 2007gr was discovered in 2007 with the Katzman Automatic Imaging Telescope in California, USA. Optical observations showed that it was Type Ic, known to result from the most massive stars. Supernovae are very distant sources, and the radio emissions they produce fade quickly. Therefore, the highest resolution imaging technique, called Very Long Baseline Interferometry (VLBI), is required to receive the extremely faint emission and reveal the details of the explosion process. Because SN 2007gr was located in a relatively nearby galaxy, closer than any other Type Ic supernovae detected in the radio spectrum, it offered a unique opportunity to study this phenomenon.

With the VLBI technique, radio telescopes located up to thousands of kilometers from each other carry out measurements synchronously. Paragi's team exploited the electronic, real-time VLBI (e-VLBI) capabilities of the European VLBI Network (EVN), by which the data are streamed in real-time from the telescopes to the central data processor at JIVE. Rapid analysis of the SN 2007gr data, obtained 22 days after the initial discovery, showed that the source was still visible in the radio spectrum, and confirmed the technical feasibility of radio observations. Based on this result, the team carried out further observations with the EVN and the Green Bank Telescope in West Virginia, USA. For the first time ever, they were able to show mildly relativistic expansion in such a source.

Although it showed peculiar radio properties, SN 2007gr was otherwise a normal Type Ic supernova. It appears that only a small fraction of the matter that was ejected in the explosion reached a velocity at least half the speed of light. According to the emerging picture, this mildly relativistic matter was collimated into a bipolar narrow cone, or jet. The team concludes that it is possible that all, or at least most, Type Ic supernovae produce bipolar jets, but the energy content of these mildly-relativistic outflows varies dramatically, while the total energy of the explosions is much more standard.

"At least a fraction of Type Ic supernovae have been thought for a long time to produce highly collimated relativistic jets," says Paragi. "Our observations support this and provide new clues for the understanding of how supernovae explode, and how some of them may be related to the even more energetic gamma ray bursts."

The Westerbork Synthesis Array Telescope, operated by ASTRON, played an important role in obtaining this result due to its large collecting area, which significantly improved the sensitivity of the VLBI observations. Moreover, it provided an independent measurement of the total flux density, or brightness, of the source.

These observations also showcase how the new e-VLBI services of the EVN empower astronomers to react quickly when transient events occur. "Organizing VLBI observations on a short timescale with the most sensitive radio telescopes on Earth is a challenging task," notes JIVE director Huib Jan van Langevelde. "Using the electronic-VLBI technique eliminates some of the major issues. Moreover, it allows us to produce immediate results necessary for the planning of additional measurements. The scientific outcome from the SN 2007gr observations shows the impact of the technological development in our field in the last few years, which allows highly efficient collaboration between radio telescopes within and even outside of Europe."

About JIVE
The Joint Institute for VLBI in Europe (JIVE, www.jive.nl) is a scientific foundation with a mandate to support the operations of the European VLBI Network (EVN). For this purpose it maintains, operates and develops the MKIV EVN Data Processor, a powerful supercomputer that combines the signals from radio telescopes located across the planet. Through this technique, called Very Long Baseline Interferometry (VLBI), astronomers can make detailed images of cosmic radio sources, providing astronomers with the clearest, highest resolution view of some of the most distant and energetic objects in the Universe.

About ASTRON
ASTRON (www.astron.nl) is the Netherlands Institute for Radio Astronomy. Its mission is to make discoveries in radio astronomy happen, via the development of novel and innovative technologies, the operation of world-class radio astronomy facilities (the Westerbork Synthesis Radio Telescope and the Low-Frequency Array, or LOFAR), and the pursuit of fundamental astronomical research.

About the EVN
The European VLBI Network (EVN, www.evlbi.org) is a collaboration of the major radio astronomical institutes in Europe, Asia and South Africa that conducts unique, high resolution, radio astronomical observations of cosmic radio sources. It is the most sensitive VLBI array in the world, thanks to the collection of extremely large telescopes that contribute to the network. e-VLBI capabilities of the EVN were made possible by Express Production Real-time e-VLBI Service (EXPReS, www.expres-eu.org), funded under the European Commission’s Sixth Framework Programme, contract number 026642.