Above: Figure 1: A low-resolution image of IRC+10420 taken with the UK's MERLIN radio telescope array showing the shell of 'maser' emission at a frequency of 1612 MHz. The corresponding EVN e-VLBI image (right) shows the much finer structure of the masers because of the zoom lens effect of large telescope baselines. The expanding shell of gas revealed by these observations has a diameter about 200 times that of our own Solar System. The gas is moving at about 40 km/s and was ejected by the star about 900 years ago. The study of the dynamics and chemistry of these gas shells enable astronomers to investigate the production of chemical elements important for star and planet formation, and ultimately life itself.

European and US radio astronomers have demonstrated a new way of observing the Universe - through the Internet!

Using cutting-edge technology, the researchers have managed to observe a distant star by using the world's research networks to create a giant virtual telescope. The process has allowed them to image the object with unprecedented detail, in real-time; something which only a few years ago would have been impossible. The star chosen for this remarkable demonstration, called IRC+10420, is one of the most unusual in the sky. Surrounded by clouds of dusty gas and emitting strongly in radio waves, the object is poised at the end of its life, heading toward a cataclysmic explosion known as a 'supernova'.

These new observations give an exciting glimpse of the future of radio astronomy. Using research networks, not only will radio astronomers be able to see deeper into the distant Universe, they'll be able to capture unpredictable, transient events as they happen, reliably and quickly.

Astronomers are always seeking to maximise the resolution of their telescopes. Resolution is a measure of the amount of detail it can pick out. The bigger the telescope, the better the resolution. VLBI (or Very Long Baseline Interferometry) is a technique used by radio astronomers to image the sky in supreme detail. Instead of using a single radio dish, arrays of telescopes are linked together across whole countries or even continents. When the signals are combined in a specialised computer, the resulting image has a resolution equal to that of a telescope as large as the maximum antenna separation.

In the past, the VLBI technique was severely hampered because the data had to be recorded onto tape and then shipped to a central processing facility for analysis. Consequently, radio astronomers were unable to judge the success of their endeavours until many weeks, even months, after the observations were made. The solution, to link the telescopes electronically in real-time, enables astronomers to analyse the data as it happens. The technique, naturally called e-VLBI, is only possible now that high-bandwidth network connectivity is a reality. 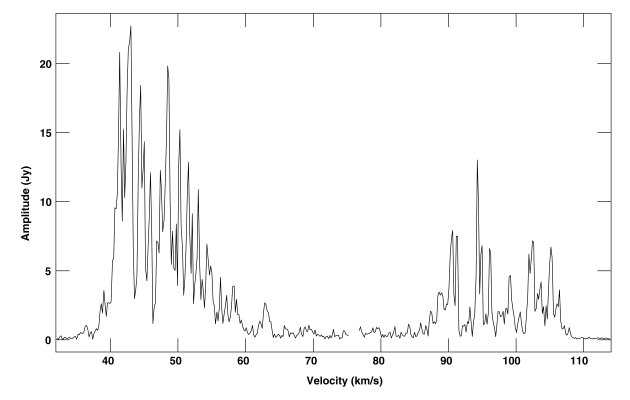 Figure 2: The spectrum of IRC+10420 (a plot of signal strength as it changes with frequency of the radio waves), as observed during the EVN e-VLBI observations of 22nd September. The total velocity width of the emission shows that the shell of IRC+10420 is expanding at about 40 km/s.

The recent 20-hour long observations, performed on 22nd September using the European VLBI Network (EVN), involved radio telescopes in the UK, Sweden, the Netherlands, Poland and Puerto Rico. The maximum separation of the antennas was 8200 km, giving a resolution of at least 20 milliarcseconds (mas); this is about 5 times better than the Hubble Space Telescope (HST). This level of detail is equivalent to picking out a small building on the surface of the moon! The inclusion of the antenna at Arecibo, in Puerto Rico, also increased the sensitivity of the telescope array by a factor of 10. Even so, observing at a frequency of 1612 MHz, the signal from the distant star was more than a billion billion times weaker than a typical mobile phone handset!

Each telescope was connected to its country's National Research and Education Network (NREN), and the data routed at 32 Mbits/second per telescope through GÉANT, the pan-European research network, to SURFnet, the Dutch network. The data were then delivered to the Joint Institute for VLBI in Europe (JIVE), the central processing facility for the EVN in the Netherlands. There, the 9 Terabits of data were fed in real-time into a specialised supercomputer, called a 'correlator', and combined. The same research networks were then used to deliver the final data product directly to the astronomers who formed the image. Until the network infrastructure provided GÉANT became available, astronomers were unable to transfer the huge amounts of data required for e-VLBI across the Internet. In a very real sense, the Internet itself acts like a telescope, performing the same job as the curved surfaces of the individual radio dishes. Dai Davies, General Manager of DANTE who operate GÉANT, said "e-VLBI performed successfully on an intercontinental basis demonstrates in the clearest possible terms the importance of data communications networks to modern science. Research networking is fundamental to this new radio astronomy technique and it is very satisfying indeed to see the benefits that are now resulting from it".

Although the scientific goals of the experiment were modest, these e-VLBI observations of IRC+10420 open up the possibility of watching the structures of astrophysical objects as they change. IRC+10420 is a supergiant star in the constellation of Aquila. It has a mass about 10 times that of our own Sun and lies about 15,000 light years from Earth. One of the brightest infrared sources in the sky, it is surrounded by a thick shell of dust and gas thrown out from the surface of the star at a rate of about 200 times the mass of the Earth every year. Radio astronomers are able to image the dust and gas surrounding IRC+10420 because one of the component molecules, hydroxyl (OH), reveals itself by means of strong 'maser' emission. Essentially, the astronomers see clumps of gas where radio emission is strongly amplified by special conditions. With the zoom lens provided by e-VLBI, astronomers can make images with great detail and watch the clumps of gas move, watch masers being born and die on timescales of weeks to months, and study the changing magnetic fields that permeate the shell. The results show that the gas is moving at about 40 km/s and was ejected from the star about 900 years ago. As Prof. Phil Diamond, one of the research team at Jodrell Bank Observatory (UK), explained, "the material we're seeing in this image left the surface of the star at around the time of the Norman Conquest of England".

It is believed IRC+10420 is rapidly evolving toward the end of its life. At some point, maybe thousands of years from now, maybe tomorrow, the star is expected to blow itself apart in one of the most energetic phenomena known in the Universe - a 'supernova'. The resulting cloud of material will eventually form a new generation of stars and planetary systems. Radio astronomers are now poised, with the incredible power of e-VLBI, to catch the details as they happen and study the physical processes that are so important to the structure of our Galaxy and to life itself.

The emergent technology of e-VLBI is set to revolutionise radio astronomy. As network bandwidths increase, so too will the sensitivity of e-VLBI arrays, allowing clearer views of the furthest and faintest regions of space. Dr Mike Garrett, JIVE Director, commented, "These results provide a glimpse of the enormous potential of e-VLBI. The rapid progress in global communications networks should permit us to connect together the largest radio telescopes in the world at speeds exceeding tens of Gigabits per second over the next few years. The death throes of the first massive stars in the Universe, the emerging jets of matter from the central black-holes of the first galaxies, will be revealed in exquisite detail."