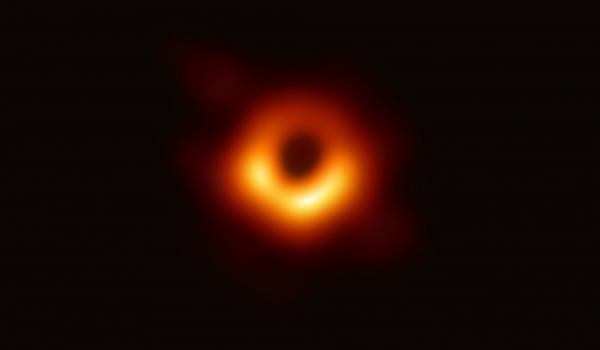 The Joint Institute for VLBI ERIC contributes to paradigm-shifting observations of the gargantuan black hole at the heart of distant galaxy Messier 87.

The Event Horizon Telescope (EHT) - a planet-scale array of eight ground-based radio telescopes forged through international collaboration - was designed to capture images of a black hole. Today, in coordinated press conferences across the globe, EHT researchers reveal that they have succeeded, unveiling the first direct visual evidence of a supermassive black hole and its shadow.

This breakthrough was announced today in a series of six papers published in a special issue of The Astrophysical Journal Letters. The image reveals the black hole at the centre of Messier 87 [1], a massive galaxy in the nearby Virgo galaxy cluster. This black hole resides 55 million light-years from Earth and has a mass 6.5-billion times that of the Sun [2].

The EHT links telescopes around the globe to form an Earth-sized virtual telescope with unprecedented sensitivity and resolution [3]. The EHT is the result of years of international collaboration, and offers scientists a new way to study the most extreme objects in the Universe predicted by Einstein's general relativity during the centennial year of the historic experiment that first confirmed the theory [4].

"We are giving humanity its first view of a black hole - a one-way door out of our Universe," said EHT project director Sheperd S. Doeleman of the Center for Astrophysics | Harvard & Smithsonian. "This is a landmark in astronomy, an unprecedented scientific feat accomplished by a team of more than 200 researchers."

Black holes are extremely compressed cosmic objects, containing incredible amounts of mass within a tiny region. The presence of these objects affects their environment in extreme ways, warping spacetime and super-heating any surrounding material.

"If immersed in a bright region, like a disc of glowing gas, we expect a black hole to create a dark region similar to a shadow - something predicted by Einstein's general relativity that we've never seen before," explained chair of the EHT Science Council Heino Falcke of Radboud University, the Netherlands. "This shadow, caused by the gravitational bending and capture of light by the event horizon, reveals a lot about the nature of these fascinating objects and allowed us to measure the enormous mass of M87's black hole."

Multiple calibration and imaging methods have revealed a ring-like structure with a dark central region - the black hole's shadow - that persisted over multiple independent EHT observations.

"Once we were sure we had imaged the shadow, we could compare our observations to extensive computer models that include the physics of warped space, superheated matter and strong magnetic fields. Many of the features of the observed image match our theoretical understanding surprisingly well," remarks Paul T.P. Ho, EHT Board member and Director of the East Asian Observatory [5]. "This makes us confident about the interpretation of our observations, including our estimation of the black hole's mass."

Creating the EHT was a formidable challenge which required upgrading and connecting a worldwide network of eight pre-existing telescopes deployed at a variety of challenging high-altitude sites. These locations included volcanoes in Hawai`i and Mexico, mountains in Arizona and the Spanish Sierra Nevada, the Chilean Atacama Desert, and Antarctica.

The EHT observations use a technique called very-long-baseline interferometry (VLBI) which synchronises telescope facilities around the world and exploits the rotation of our planet to form one huge, Earth-size telescope observing at a wavelength of 1.3mm. VLBI allows the EHT to achieve an angular resolution of 20 micro-arcseconds - enough to read a newspaper in New York from a sidewalk café in Paris [6].

The construction of the EHT and the observations announced today represent the culmination of decades of observational, technical, and theoretical work. This example of global teamwork required close collaboration by researchers from around the world. Thirteen partner institutions worked together to create the EHT, using both pre-existing infrastructure and support from a variety of agencies. Key funding was provided by the US National Science Foundation (NSF), the EU's European Research Council (ERC), and funding agencies in East Asia.

As part of the EHT project, JIVE developed software to calibrate data from the observations. "The calibration is especially challenging at these short wavelengths. To obtain a signal, the data from different telescopes have to be combined with extremely high precision," explains Ilse van Bemmel from JIVE. "The software tools are now publicly available, enabling everyone to verify the EHT results, as well as ensuring future VLBI observations at all wavelengths are easier and more accessible."

"It is truly amazing that we have seen this shadow for the first time," says Huib van Langevelde. "The black hole in M87 required all millimeter telescopes in the world, including ALMA, to work in perfect synchronicity. The subsequent data calibration, imaging, analysis and theoretical models posed a major challenge for our international collaboration."

"We have achieved something presumed to be impossible just a generation ago," concluded Doeleman. "Breakthroughs in technology and the completion of new radio telescopes over the past decade enabled our team to assemble this new instrument - designed to see the unseeable."

[1] The shadow of a black hole is the closest we can come to an image of the black hole itself, a completely dark object from which light cannot escape. The black hole's boundary - the event horizon from which the EHT takes its name - is around 2.5 times smaller than the shadow it casts and measures just under 40 billion km across.

[2] Supermassive black holes are relatively tiny astronomical objects - which has made them impossible to directly observe until now. As a black hole's size is proportional to its mass, the more massive a black hole, the larger the shadow. Thanks to its enormous mass and relative proximity, M87's black hole was predicted to be one of the largest viewable from Earth - making it a perfect target for the EHT.

[3] Although the telescopes are not physically connected, they are able to synchronize their recorded data with atomic clocks - hydrogen masers - which precisely time their observations. These observations were collected at a wavelength of 1.3 mm during a 2017 global campaign. Each telescope of the EHT produced enormous amounts of data - roughly 350 terabytes per day - which was stored on high-performance helium-filled hard drives. These data were flown to highly specialised supercomputers - known as correlators - at the Max Planck Institute for Radio Astronomy and MIT Haystack Observatory to be combined. They were then painstakingly converted into an image using novel computational tools developed by the collaboration.

[4] 100 years ago, two expeditions set out for the island of Príncipe off the coast of Africa and Sobra in Brazil to observe the 1919 solar eclipse, with the goal of testing general relativity by seeing if starlight would be bent around the limb of the sun, as predicted by Einstein. In an echo of those observations, the EHT has sent team members to some of the world's highest and isolated radio facilities to once again test our understanding of gravity.

[5] The East Asian Observatory (EAO) partner on the EHT project represents the participation of many regions in Asia, including China, Japan, Korea, Taiwan, Vietnam, Thailand, Malaysia, India and Indonesia.

[6] Future EHT observations will see substantially increased sensitivity with the participation of the IRAM NOEMA Observatory, the Greenland Telescope and the Kitt Peak Telescope.

This research was presented in a series of six papers published today in a special issue of The Astrophysical Journal Letters.

The EHT collaboration involves more than 200 researchers from Africa, Asia, Europe, North and South America. The international collaboration is working to capture the most detailed black hole images ever by creating a virtual Earth-sized telescope. Supported by considerable international investment, the EHT links existing telescopes using novel systems - creating a fundamentally new instrument with the highest angular resolving power that has yet been achieved.

The Joint Institute for VLBI ERIC

The Joint Institute for VLBI ERIC (JIVE) has contributed to the calibration of data from the EHT observations, in particular by implementing new VLBI software together with the team at Radboud University. JIVE is an international institute based in the Netherlands that provides support, conducts leading research and forwards technical development in the field of radio astronomy. Its primary mission is to operate and develop a powerful supercomputer, known as the correlator, which processes data from the European VLBI Network (EVN) - an array of radio telescopes located across the globe. JIVE is funded by six member countries: the Netherlands, France, Latvia, Spain, Sweden and the United Kingdom; it is also supported by four participating research institutes: the National Astronomical Observatories of China, the Max Planck Institute for Radio Astronomy, the Italian National Institute of Astrophysics and the National Research Foundation. JIVE is hosted at the offices of the Netherlands Institute for Radio Astronomy (ASTRON) in the Netherlands.