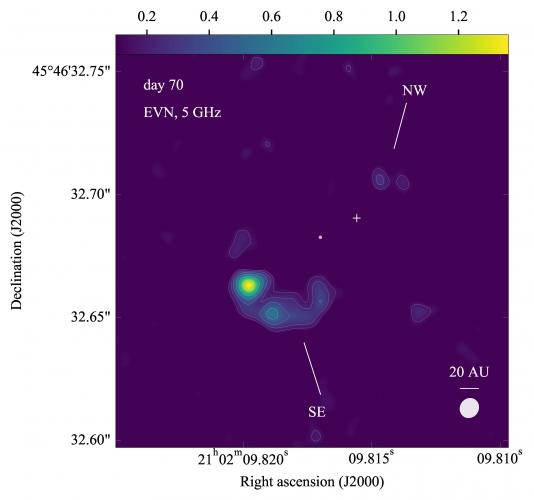 An international group of researchers observed a source of variable gamma rays identified in 2010 by the NASA satellite Fermi. They used a technique called VLBI, that combines data from several radio telescopes on Earth, to produce the sharpest images. Surprisingly, the source of gamma rays was a symbiotic nova, a peculiar stellar system known to astronomers as V407 Cyg. These stellar systems were not known to emit very high energy radiation, therefore with the observations in 2010, Fermi identified the first member of a new class of objects.The astronomers now released the results of their VLBI campaign carried out during the spectacular outburst that produced the gamma rays. The images, compiled using the radio waves detected by telescopes in Europe and in the US, are the most detailed to date. They reveal the aftermath of a powerful cosmic explosion due to the interaction of two stars on close orbit.

In March 2010 the Large Area Telescope on NASA's Fermi satellite revealed a transient source of gamma rays matching the position of the symbiotic nova V407 Cygni. Initially considered a sort of "stellar exception", V407 Cygni, instead, gave birth to a new class of gamma objects. Symbiotic novae are rare and exceptional objects, couples of stars composed of two very different companions: a small, dense, white dwarf and a pulsating red giant. The red giant emits a wind of material that is accumulated on the surface of the white dwarf and, when it reaches a critical density, gives rise to a very bright explosion.

While symbiotic novae are rare objects themselves, observing a symbiotic nova like V407 Cygni in gamma rays was an absolute breakthrough. The researchers went then in search of evidence indicating the presence of shocks, passing through the material in the form of shock waves, due to the very energetic physical processes involved in the event. Never before so detailed radio-band images reveal the shock produced by the explosion of the material on the surface of the white dwarf as it expands into the atmosphere of the red giant companion. The study was published in the journal Astronomy & Astrophysics, first author is Marcello Giroletti from INAF, Italy.

"Novae, with their sudden increases in visible light emission, have fascinated astronomers for centuries and their revelation in gamma rays has been a great surprise" says Giroletti, and continues "Having been able to witness, thanks to radio waves, not only the increase in brightness, but also the choreography produced by the interaction of these two stars is a very exciting result, and one of great scientific value". 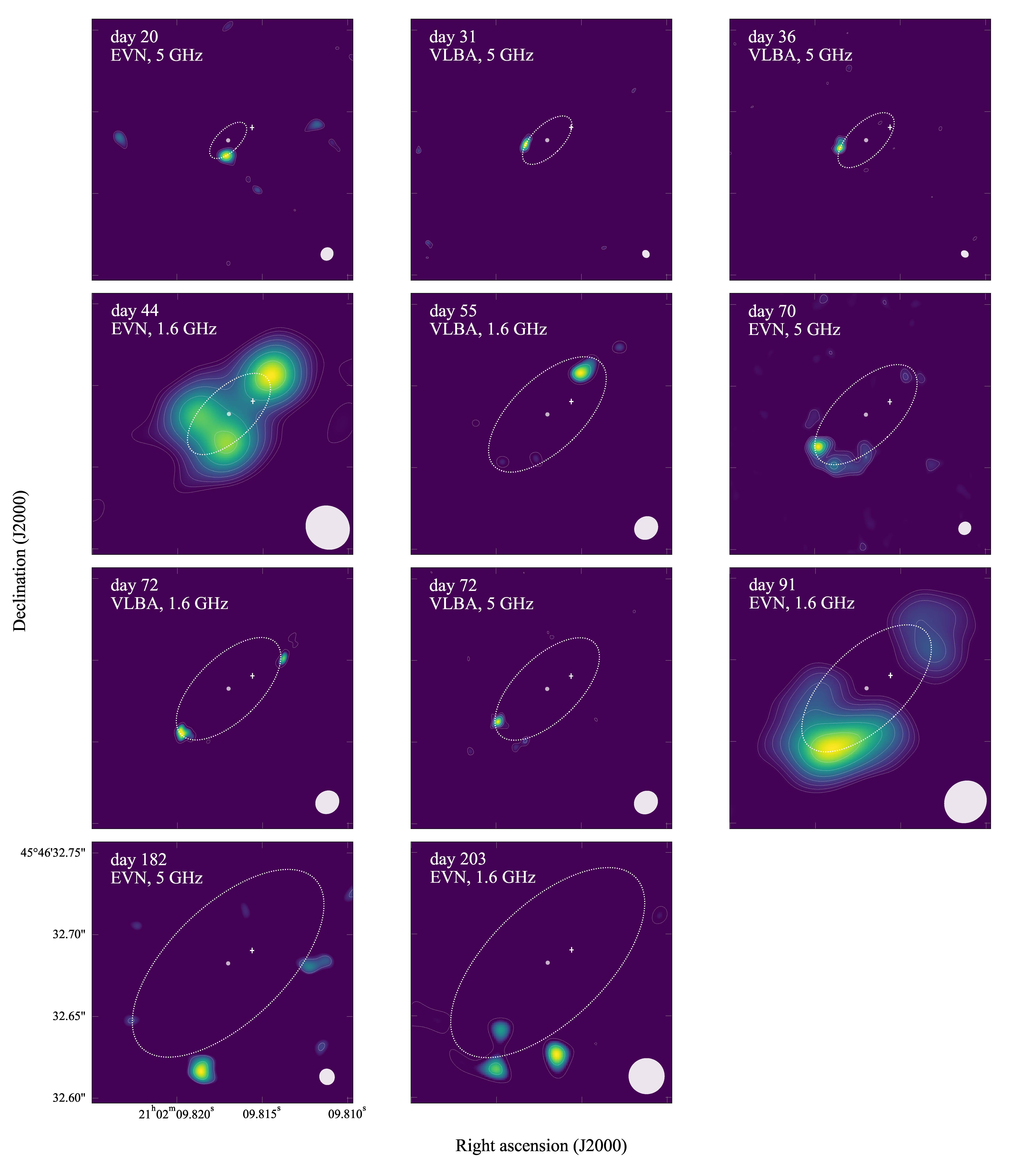 The new observations were possible thanks to the very high level of detail obtained in the radio band by the VLBI (Very Long Baseline Interferometry) technique, which made it possible to directly visualize the appearance and propagation of the shock.

While demonstrating for the first time in a direct way the presence of the shock in this type of events, the researchers were also able to understand how the source is oriented: the red giant is in the foreground in front of the white dwarf, and from the latter two opposite jets depart, in the plane of the sky, perpendicular to the line of sight.

The observations also allowed researchers to reveal traces of previous events in the life of this binary star, one around 2003, one even dating back to the 1930s. A step forward in understanding the evolution of these rare objects.

These results are the outcome of an intense and ambitious observational campaign. The data from the European VLBI Network (EVN) were streamed in real-time to the central data processor (correlator) at JIVE, a European Research Infrastructure Consortium in Dwingeloo, the Netherlands. A super computer combined the data obtained simultaneously from all the antennas of the network, and this allowed the researchers to understand right away that this was really an unmissable event.

Single plot: A radio image of the emission from V407 Cyg, 70 days after the explosion. The colour scale indicate the intensity of the emission (yellow is brighter), which is developing on two opposite fronts with respect to the location of the central white dwarf.

Composite image: The set of images obtained from the observations, starting 20 days after the discovery of the nova event and tracing the advance of the shock front for over six months.

The European VLBI Network (EVN; www.evlbi.org) is an interferometric array of radio telescopes spread throughout Europe, Asia, South Africa and the Americas that conducts unique, high-resolution, radio astronomical observations of cosmic radio sources. Established in 1980, the EVN has grown into the most sensitive VLBI array in the world, including over 20 individual telescopes, among them some of the world's largest and most sensitive radio telescopes. The EVN is administered by the European Consortium for VLBI, which includes a total of 15 institutes, including the Joint Institute for VLBI ERIC
(JIVE).

The Joint Institute for VLBI ERIC (JIVE; www.jive.eu) has as its primary mission to operate and develop the EVN data processor, a powerful supercomputer that combines the signals from radio telescopes located across the planet. Founded in 1993, JIVE is since 2015 a European Research Infrastructure Consortium (ERIC) with six member countries: France, Latvia, the Netherlands, United Kingdom, Spain and Sweden; additional support is received from partner institutes in China, Germany, Italy and South Africa. JIVE is hosted at the offices of the Netherlands Institute for Radio Astronomy (ASTRON) in the Netherlands.