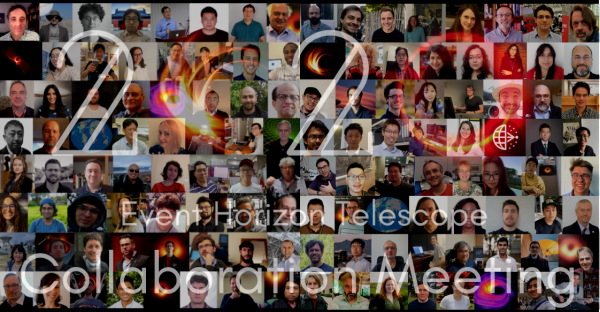 The Event Horizon Telescope (EHT) collaboration is excited for having been granted with the 2021 Group Achievement Award (A) by the Royal Astronomical Society (RAS). The EHT is a global network of synchronised radio observatories that work in unison to observe radio sources associated with black holes. In April 2019, the EHT team showed the world the first image of the shadow cast by the black hole in M87, made possible by the enormous baselines which give the EHT its exquisite angular resolution.

The RAS citation statement, made public on January 8th, 2021, reads: "this image has already inspired millions and will continue to do so. It represents an important milestone in human ingenuity and scientific endeavour, and is opening new doorways to study the physics of accretion around super-massive black holes in completely unprecedented ways." Furthermore, "the realisation of the EHT represented a formidable challenge and was made possible only by decades of hard work and commitment by thirteen stakeholder institutions, a variety of agencies, and more than three hundred forty researchers. This is one of the finest examples of an achievement resulting from close collaboration by researchers from around the World."

The members of the EHT are honoured by this distinction that the RAS awards in order to recognize outstanding achievements by large consortia in any branch of astronomy. Among the previous winners count the Planck Team in 2018 and the LIGO Team in 2017. For its unparalleled precise observations, the EHT combines the power of existing telescopes that can observe at millimetre wavelength around the world, including the ALMA interferometer in the Chilean Andes that is operated in a joint global collaboration.

The collaboration director, Huib van Langevelde (JIVE), states: "we are thrilled that our work on imaging of the event horizon regions in super-massive black holes, at the edge of technology and achieving extreme resolutions in astronomy gets such a recognition from this renowned institution; it is an inspiration to our team to deliver more, fundamental scientific results on black holes".