High-mass stars are prominent in the ecology of the interstellar medium and the evolution of Galaxies. Though much needed, there is no general theory of high-mass star formation. The main issue for models is that the intense stellar radiation pressure and the thermal pressure from the surrounding ionized material, may reverse the accretion flow and prevent matter from reaching the star. Recent theoretical studies have however demonstrated that radiation pressure can be overcome if accretion occurs through a circumstellar disk. Despite the theoretical evidence, we have not yet conclusively identified a single high-mass protostar in the Galaxy surrounded by an accretion disk.

We observed NGC7538-IRS1 (at 2.7 kpc) with the European VLBI Newtwork (EVN) in the 6.7 GHz maser line of methanol, which is a typical signpost of high-mass star formation. Four observing epochs spanning eight years were used to measure positions, proper motions, line-of-sight velocities and accelerations of methanol masers. These measurements provided 3D kinematics and dynamics of circumstellar gas on scales from tens to a thousand AU.

We find compelling evidence that NGC7538-IRS1 is forming a multiple system of high-mass young-stars surrounded by disks. Data modeling enabled us to identify quasi-Keplerian rotation around a 25 solar mass star and a thick disk containing 16 solar masses around a nearby protostar. These measurements are critical to test theoretical models of accretion for massive stars. The results will be published in the following issue of A&A.

Figure 1: The NGC7538 Star Forming Region (2.7 kpc). (Left) Three color IRAC image in the mid-infrared from the Spitzer Space Observatory. (Right) 6.7 GHz methanol maser emission spots (filled circles) observed with the EVN overlaid on the the 22 GHz continuum map imaged with the VLA (black image and white contours). Colors denote line-of-sight velocities, with blue indicating blue-shifted emission and red indicating red-shifted emission. The sizes of the circles scale with the flux density. The ellipses represent the disk planes surrounding the two young stars IRS1a and IRS1b, resolved by the EVN, with the solid lines indicating the near-side and the dashed lines the far-side of the disks.

Gabriele Surcis, Huib Jan van Langevelde, and Ciriaco Goddi together with colleagues from Sweden, Spain, Mexico, and South Korea observed the polarized emission of 22 GHz water masers around the massive young stellar objects (YSOs) W75N-VLA2 and W75N-VLA1. The two massive YSOs are separated by just 1300 astronomical units and are at two different evolutionary stages, i.e., VLA1 is the most evolved and VLA2 the least evolved. The interferometric observations showed at 1~au scale that while the water masers distribution and the magnetic field around VLA1 have not changed since 2005, the shell structure of the masers around VLA2 is still expanding and increasing its ellipticity. Furthermore, the magnetic field around VLA2 has changed its orientation according to the new direction of the major-axis of the shell-like structure and it is now aligned with the magnetic field in VLA1. This confirm that the water masers around VLA2 are tracing the evolution from a non-collimated to a collimated outflow.

Gabriele Surcis and Huib Jan van Langevelde together with Wouter Vlemmings (Chalmers University of Technology), Busaba Hutawarakorn Kramer (MPIfR), and Anna Bartkiewicz (Nicolaus Copernicus University) continued their work on measuring magnetic fields morphology close to massive YSOs (au scale) by using 6.7 GHz methanol masers. The group measured the magnetic field morphology towards eight new massive YSOs. These sources are part of a large sample of massive YSOs, the so-called flux-limited sample, that is composed of 31 sources. A preliminary statistical analysis of the results obtained from the first 19 sources reveals evidences that the magnetic fields around massive YSOs are preferentially oriented along the molecular outflow. Furthermore, the group together with Luca Moscadelli (Osservatorio Astronomico di Arcetri) have determined the morphology of the magnetic field at au scale around the massive YSO IRAS20126+4104 by observing the polarized emission of the 22 GHz water masers and the 6.7 GHz methanol masers. The orientation of the magnetic field derived from the masers agrees with the S-shaped morphology on larger scale by using the dust-polarized emission at 350~\mu~m.

figure_1a.eps, figure_1b.eps: A close-up view of the 22 GHz water masers detected around the VLA1 (left panel) and VLA2 (right panel). The reference position is $\alpha_{2000}=20^{\rm{h}}38^{\rm{m}}36^{\rm{s}}\!.435$ and $\delta_{2000}=42^{\circ}37'34\!\!.84$. The octagonal symbols are the identified masers scaled logarithmically according to their peak flux density. The linear polarization vectors, scaled logarithmically according to polarization fraction, are overplotted. In the bottom-right corner of both panels the error-weighted orientation of the magnetic field ($\Phi_{\rm{B}}$) is also reported; the two dashed segments indicate the uncertainties. The ellipse drawn in the right panel is the result of the best fit of the water masers. The estimated values of the magnetic field strength are also shown in both panels next to the corresponding water maser. figure_2a.eps, figure_2b.eps: Left panel: The black bars represent the magnetic field direction determined from the polarized dust emission at 350~$\mu$m, whose continuum emission is in the background. The white box indicates the position of the right panel. Right panel: methanol (triangles), OH (squares), and water (octagons) masers in IRAS20126+4104. The gold asterisk represents the B0.5 protostar ($\alpha_{2000}=20^{\rm{h}}14^{\rm{m}}26^{\rm{s}}\!.0498$ and $\delta_{2000}=41^{\circ}13'32\!\!.443$, MCR11), while the dotted line represents the Keplerian disk of $\sim$1000~au ($\rm{PA_{disk}}=53^{\circ}\pm7$\d. The red and blue lines indicate the red- and blue-shifted lobes of the jet, respectively. The thick green segments represent the magnetic field direction determined from the polarized methanol and water maser emissions. The green dashed segments represent the magnetic field direction determined from the linearly polarized emission of OH masers (Edris et al. 2005, A&A, 434, 213). 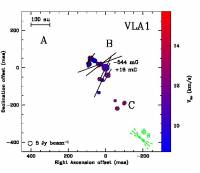 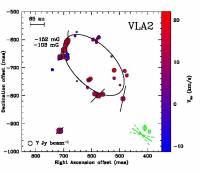 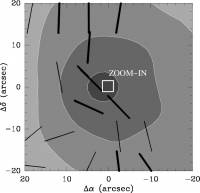 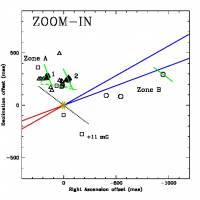