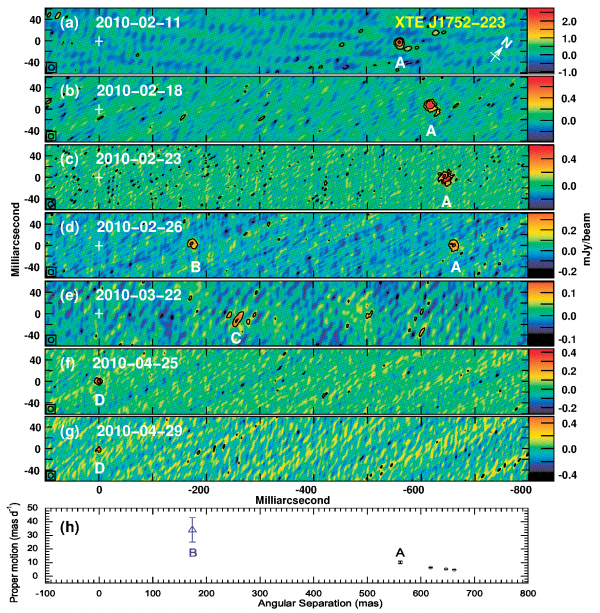 VLBI images of the transient jets components A, B, C, and the re-activated compact jet D in XTE J1752−233. The bottom panel shows the proper motion versus angular separation for components A and B. All the images are centred at the compact jet (0,0) and rotated clockwise by 39◦. The contours start from 3sigma off-source noise level and increase by a factor of -1, 1, 2, 4. The size of the restoring beam is 10 mas.

VLBI total intensity images of MAXI J1836−194. The synthesized beams are plotted in the bottom left-hand corner. The contours start from 3 sigma off-source noise level (0.54 mJy/beam at 8.3 GHz, 0.24 mJy/beam at 5 GHz) and increase by a factor of 2.

Jun Yang (Co-PI) and Zsolt Pargi observed Nova Mon 2012 in collaboration with Tim O’Brien (PI, University of Manchester, UK) and Laura Chomiuk (NRAO, US). A nova is a cataclysmic nuclear explosion in a white dwarf star. Nova Mon 2012 was first reported as a gamma-ray transient, subsequently associated with an optical nova in Monocerotis. With the real-time e-VLBI observations, Nova Mon 2012 was found to have a pair of hot spots moving out in NW-SE (O'Brien et al. 2012, ATel 4408) and a transient hot spot that was only shown in the second epoch.

Ding Chen (National Space Science Center, China) and Jun Yang performed astrometric observations of the bright X-ray millisecond pulsar PSR J0218+4232 during 2011-2012. Currently, all the observations were finished. The final data reduction and astrometry analysis will be started soon. They will report the preliminary results of proper motion and parallax in the meeting of “The Modern Radio Universe” at Bonn in April.

Working with Fang Wu (ShAO, China) and Tao An (ShAO, China), Jun Yang and Zsolt Paragi imaged the jet in the broad absorption line quasar PG 1700+518. They presented its jet structure on scales of parsec to kiloparsec for the first time (Yang et al. 2012, MNRAS, 419, L74). The source shows two distinct jet features in East-West direction with a separation of around 4 kpc in the VLA image. They identified the radio core and found a symmetric jet morphology in the western jet feature with the EVN observations. The jet axis is nearly parallel to the scattering plane revealed earlier by optical polarimetry. They conclude that the jet likely has a viewing angle around 45 degree by analogy to polar-scattered Seyfert 1 galaxies. Furthermore, their observations have confirmed the earlier finding that the majority of radio emission in this galaxy arises from AGN activity rather than star-formation.

Jun Yang, Zsolt Paragi, Leonid Gurvits, Robert M. Campbell, and Alexander van der Horst (University of Amsterdam) have initiated a campaign in directly observing the motion of the relativistic jet in the tidal disruption event Swift J1644+57. Currently, they have observed the transient AGN at four epochs. The preliminary results show that a position precision of ~15 micro-arcseconds can be achieved with respect to an in-beam calibrator (FIRST J1644+5736, 2.8 arcmin away). With more such high-precision observations, the question whether there is a superluminal jet in Swift J1644+57 can be answered in the near future. 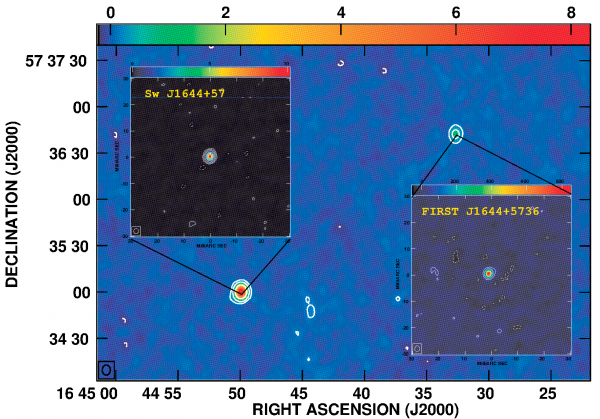 The EVN phase-referencing observations of Swift J1644+57 and its in-beam calibrator FIRST J1644+5736 (a separation of 2.8 arcmin). The background color image is the WSRT map (no primary beam correction). Contours start from the 3 noise level. Each increases by a factor of 4. Natural weighting was used.